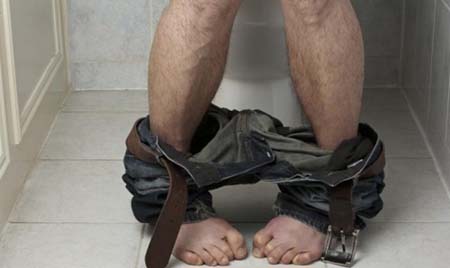 Ciaran Walshe, a 27-year-old call centre worker, has spent the last 40 minutes sitting on the toilet and is now beginning to worry.

In a display of misplaced faux-macho bravado he told several male co-workers he was going ‘to drop the kids off at the pool’.

Walshe’s witty aside was met with appreciative laughter with one colleague even adding to the hilarity by saying ‘dropping an anchor in poo bay what?’ Walshe made a point of picking up the Irish Times and proclaiming ‘this could take awhile’ leaving his co-workers to smile wryly while shaking their heads.

Walshe, who has never spent longer than 4 minutes on a toilet seat, smiled to himself carelessly as he went about his ‘business’ only to find himself at the heart of an epic struggle with his bowel movements.

With as many as 30 minutes passing without anything passing Walshe began to worry. He contemplated ringing one of his co-workers for help but he knew they and their wildly masculine ways would never accept his wimpy worrying.

Walshe took to reading the sports section but could only go as far as to stare at the pictures such was his panic. ‘This isn’t normal’, he thought to himself while contemplating ringing his GP before deciding against it – knowing once more he would be mocked by a fellow male for his laughably weak approach to toilet trips.

Meanwhile his co-workers who, like Walshe, have never exceeded the 4 minute mark on a toilet began to worry for him.

Their pronounced concern was tipped-toed around in favour of sharing over elaborate toilet stories.

‘Jaysus this one time, I swear to God twas as big as a newborn I nearly shit myself…while shitting myself’ shared a co-worker very clearly lying to everyone. ‘You think that’s bad I spent a good hour once, just popping out butt nuggets’ offered another staff member.

The office was a sea of male co-workers sharing ever more elaborate and bogus stories as Walshe continued to sit bolted to a toilet seat in the throes of an intense existential crisis.