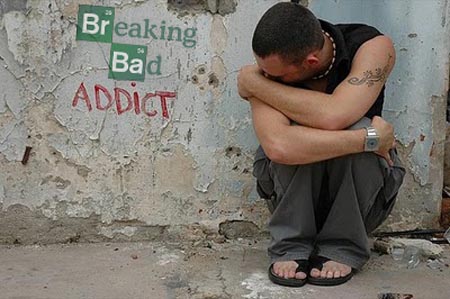 BREAKING BAD clinics around the world are gearing themselves up for what is to be the biggest onslaught of addicted patients the world has ever seen.

Thousands of temporary clinics are being set up to cope with the TV series’ finale next Sunday night.

At home, fourteen makeshift clinics are currently being erected in all major cities and towns, including Kilkenny, Clonmel and Waterford.

Today we asked Waterford Breaking Bad rehab clinic supervisor Dr. Barry Ryan for some advice on how best deal with the programs end.

“There is no easy way around the process.” explained the addiction specialist. “All we can do is wean patients off of it with re-runs of the show.

“From there, we can then substitute Breaking Bad with other such drama series’ like The Wire or Homeland.”

The final season of Breaking Bad is due to air on American channel AMC this Sunday evening, and will be available to illegally download in Ireland early Monday morning.

“We should see people start to flow in around lunch time on Monday for treatment.” added Dr. Ryan. “It will be a tough time for many people around the world.”

The temporary Waterford Breaking Bad clinic, which is currently being erected in the peoples park, will be open from 9am to 9pm Monday through Friday.

It is confirmed that day-patients will be charged a one off fee of twenty euros for treatment.

However, more addicted fans will have to undergo a three week program, consisting of several rounds of re-runs, topped off with intensive role playing scenarios involving character recreation and group therapy.

Doctors told WWN that the more serious patients will be brought into a Breaking bad role play theatre and asked to act-out scenes from the televison series.

“Its best we get it all out of their system first before they go for their final days of cold Turkey.” concluded Dr. Ryan.