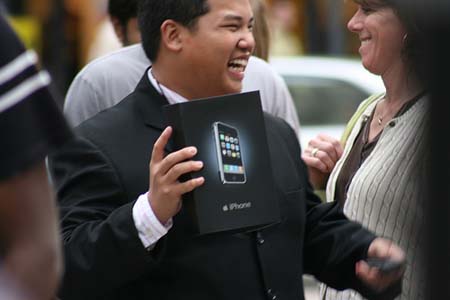 Mark Wong, who liked and shared a picture of an I-Phone 4 in 2010, was contacted by American facebook page ‘Phone-dealz’ yesterday, stating he had won the now out-dated Apple product.

The 28-year-old made his way into the social network history books by being the first ever person in the world to actually win a like and share competition.

“I gave up liking and sharing pictures for competitions late last year because I thought it was a scam.” he told WWN. “But what I can’t understand is; why did it take them so long to pick a winner? I already have an I-phone 5!”

It is estimated that there are currently 35 million facebook competitions still pending online.

Social media gurus believe that Mark is just the start of a long line of potential winners.

“The world has been waiting three years now for someone to win a facebook like and share competition.” said the social networks founder and CEO Mark Zucherberg. “I hope this quashes any doubts behind the credibility of such competitions.”

Many believed they were only designed to farm likes for business pages, until now.