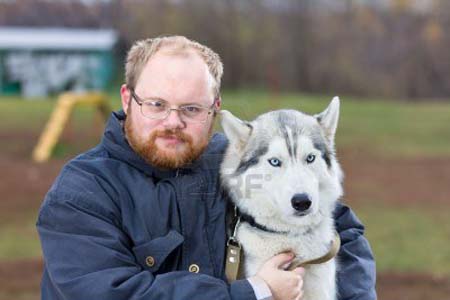 A SAKHALIN Husky owner admitted thinking today that your dog is absolutely shit and out-dated compared to his dog.

Jamie Taylor was out walking his 40 kilo pet when he came to the conclusion, stating all other dog breeds are just crap in comparison to awesome Husky’s.

“Look at the state of that knacker dog over there” said the maths teacher, who was pointing at a woman with a golden setter. “I bet that ginger fuck wouldn’t last two minutes in the North pole dragging a sleigh.”

Mr. Taylor was speaking to WWN whilst bringing his Japanese Husky for a 5 hour walk around the park earlier.

“Yeah, they can be a very demanding breed alright.” he panted, as he was being pulled along. “But its worth it just to have a better looking dog than everyone else.”

“Just look at her eyes, not a bit of goo in them, and that coat is to die for!”

In his latest book ‘On the dog walk’, fashion guru Gok Wan also advised that the latest pet trend was ‘in’ this Spring and urged fellow dog owners to ‘get with the times and buy a breed of husky’.

“Husky’s are soooOOOOoo in right now.” he said. “There is no shame handing your current drab, dull looking mutt into a animal shelter.

“After all, a dog is a reflection of yourself, and who wants to be a scruffy terrier or spaniel for Christ sakes??”

However, the book has sparked outrage among animal rights campaigners across both here and the UK.

But what the hell would they know about fashion anyway.