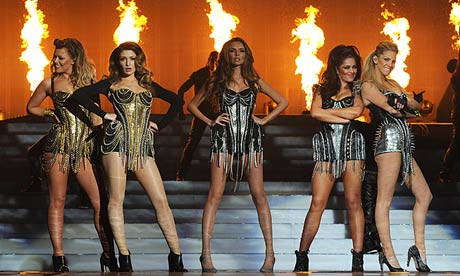 MILLIONS OF music enthusiasts around the world were said to be ‘totally unmoved’ by the fact that Girls Aloud have performed their last concert together, and are now splitting up.

Writing on their official Twitter page, the five piece girl-band said: “Dear Alouders, we just want to say from the bottom of our hearts Thank you!!`…….but we have now come to the end of our incredible time together.”

The message was sent shortly after the five singers came off stage in Liverpool at the end of a 12-date UK tour, much to the disappointment of absolutely no-one who likes music.

“Who?” said one self confessed music lover. “No seriously, what band are you on about? Is there an ugly pale ginger one in it?”

Apparently, the group took a break from ‘working’ together in 2009 to concentrate on ‘other projects’ before releasing a greatest hits album, Ten, in December.

“Are you taking the piss?” questioned another music enthusiast. “I thought those slags broke up years ago?

“Christ! Does this mean they will reunite again in five years?”