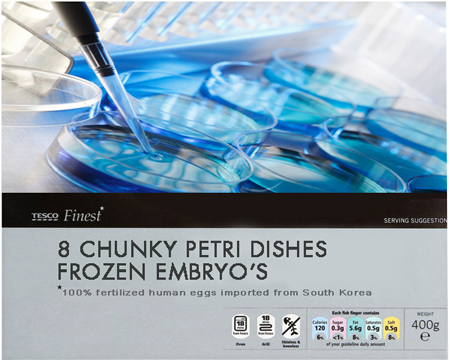 RETAIL giant Tesco has launched the worlds first commercially available frozen embryo  – the latest example of its ‘Finest range’ strategy to develop exclusive products that are to made more readily available to struggling customers looking for cheaper alternatives to medical procedures and treatments.

The supermarket hopes to “shake up its self-medication aisle” and target couples with a “luxury” brand of fertilized human female eggs imported from South Korea.

The product will coincide with its own brand  Do it yourself IVF treatment kit ™ which was introduced to the shelves in May 2012.

Chief Executive Officer for the company Tony Keohane said that further marketing will roll out over the Winter period via a €10m internet marketing strategy targeted at hip young couples with fertility problems.

“We’re going to go down a more humorous route with our campaign as we believe the whole ‘not being able to have kids taboo’ needs to be lightened up a bit.” said Mr. Tony Keohane.

Viral Internet adverts for the pack of eight chunky petri dishes full of embryos are currently being written and produced by comedy genius Eddie Izzard, and Tescos beilieve they are on to a winner with the product.

“We expect the embryos to be a hit and are looking at a home prostate examination kit which is currently under development in the states.”

Sidonie Kingsmill, Tesco brand development director, recently told WWN: “What we are trying to do is look at really important stuff that we can sell to people for a fraction of the cost, regardless of the consequences, and eventually provide a reason for the whole world to totally depend on us.”

However, boring human rights activists have attacked the multi billion euro company by saying the freezing and selling of human embyos is unethical and goes against basic moral codes.

One crusty woman with dental hygiene issues stated: ‘What happens when the embryos go out of date? Do they just throw them away? This is so wrong!!”

But what would she know.

From Monday, a pack of eight chunky petri dishes full of embryos will go on the supermarkets shelves for a recommended retail price of €69.99.