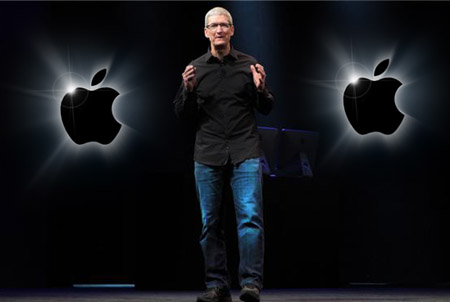 Apple has unveiled the latest version of its tall skinny guy wearing jeans and a black shirt at an event in San Francisco today.

The multi-billion euro corporation announced that the new ‘Tim Cook’ will take over from the ‘Steve Jobs’ version of the character.

Even though it is taller than the Jobs, it has more energy power, thanks to it being healthier and longer lasting than its predecessor.

The second generation blue jeans black shirt wearing guy is set to take over were the Jobs left off – selling you products that you don’t really need at prices you can’t really afford while being held into a legally bound two year contract.

“Our aim is to keep our customers locked into a contract until the time we can think of something else to sell them.” said Apple’s Phil Schiller.

In another big change, the Tim Cook will also come with more hair and even craftier hand gestures than the flimsier older Jobs design – which was later said to be ‘flawed’ by the company last year due to ongoing virus issues.

Apple have decided to keep the appearance of the new design, and expect the new Tim Cook version to last well into the latter part of the decade.

A spokesperson for the company guaranteed a 10-year battery:  “We expect the Tim Cook to only burn-out towards the end of the decade

“But not to worry, we are already looking into a newer design for 2020.”

What ever the case maybe, Apple’s latest version of its tall skinny guy in jeans and a black shirt is set to wow the masses for many a capitalist year to come.