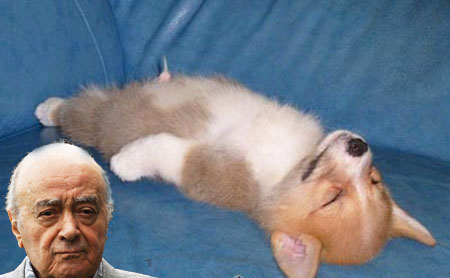 Mohamed al Fayed has urged British Prime Minister David Cameron to order an inquiry  into the recent death of the Queens Corgi today.

The father of minus one, who owns loads of stuff around England, said the untimely death of the animal had all the hallmarks of a Royal family conspiracy plot to kill living things that they didn’t like.

“The untimely death of Monty confirms the suspicions I have so often voiced and which have thus far been ignored,” said Fayed, whose son Dodi died in a glitzy car crash with Princess Diana in 1996.

Mr Al-Fayed speculated that the dog may have soiled a royal rug leading up to his death and insisted the prime minister must now accept that the time is right for a full public inquiry into the evil workings of the monarchy.

“Further delay into the matter will look as though Mr Cameron is colluding in a cover-up, and the British people of Britain will not tolerate that shit again.” he added.

Fayed has repeatedly claimed that Diana and his son were murdered by British secret services because their relationship was ‘like totally morto’ for the royal household.

Recently Monty and two other corgis greeted secret service agent James Bond, played by Daniel Craig, as he arrived at the palace to accept a mission from the Queen in a scene filmed for the curtain-raiser to the London 2012 Games.

“There was obviously a hidden message being sent to Monty and the other corgi’s – its just too much of a coincidence.”

“What ever the case may be, it needs to be fully investigated.” Fayed concluded.

The death of 13-year-old Monty, who was previously owned by a now very dead Queen Mother, leaves behind two corgis in the palace, Willow and Holly.

WWN will be covering the state funeral for the dog tomorrow, live from London.