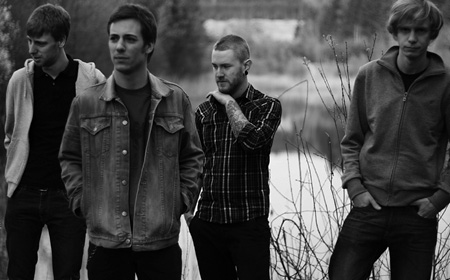 A LOCAL Waterford band have ‘upped the ante’ this week when it was confirmed by fans that they are ‘really good now’ after several black and white photographs were taken of the group by some guy with a camera.

The four piece, who simply call themselves ‘Band’, posted the high resolution pictures on their Facebook and webpage on Saturday.

Ten’s of people commented on how well the band looked in the photographs, which were taken beside a local lake early in the morning sometime.

Photographer Dermot Ryan told WWN the shoot was a long time coming and that he was quite happy with the results.

“I wanted to catch them in their natural state so I decided they should buy brand new clothes and drive at 4am to some lake they never been to before.”

“The idea first came to me last year but I have been just so busy that I didn’t get around to it.” said the unemployed 22-year-old.

Lead-singer and triangle player Simon Higgins advised on his own twitter account that this was just the next step for Band and promised more photoshoots in the near future: ‘More #bandphotos are coming soon for you guys. Onwards and upwards :-p’

The tweet was reportedly re-tweeted by at least five of his forty nine followers.

Percussionist Mark Prendergast also commented on Bands latest success saying it was all down to the hard work and originality of the group.

“I suppose we’re different to all the other bands in the Waterford and that’s why we’re getting so many gigs around the town.” said the vertically challenged tattooed drummer with little to no self esteem.

Band’s manager Timmy Spateman (18) advised young and up-coming groups in the city to just be patient and keep practising their sets like all the time.

“Band didn’t just fall into the weekly Forum gigs., we earned them from playing the quay and places like that for like weeks.”

“You just have to be dedicated and a little bit different to succeed in Waterford.” he concluded.