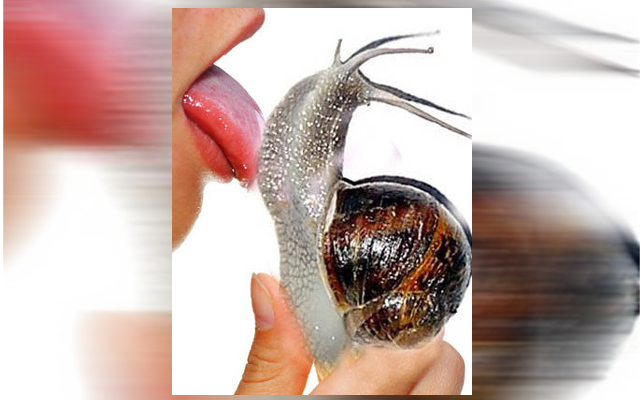 “My son, James, was on another planet. He had to sleep outside like a wet dog because he couldn’t stay in the house cause we were afraid that he would rob us blind,” says Josephine O’Brien, founder of MASL, (Mothers Against Snail licking).

Mrs. O’Brien lives in Ursuline Crescent, one of the most deprived and dangerous areas of Waterford city. She has three sons, all of whom are currently addicted to snail licking, a procedure which has been described as being deadlier and more addictive than shooting up pure heroin with a ball point pen.

Snail licking is the act of ingesting the Psychoactive mucus that a snail produces when it menstruates. The snail mucus contains 5-MeO-DMT and bufotenin. 5-MeO-DMT and bufotenin both belong to the family of hallucinogenic snails. Due to these substances the mucus of the snail produces psychoactive effects when ingested orally. The common snail was found to have such properties only late last year.

The most standard way of snail licking or ‘Shellakabuukieing’ is by moving your tongue back and forth underneath the snails belly.

This may done by switching tongue sides, or by using the upper part of the tongue for both forward and backwards movement. The main alternative route preferred by a lot of snail-lickers is preforming a circular windmill motion with the tip of your tongue. The rough grain of the snail also adds to the euphoric high. Users claim this feeling resembles that of a cat licking between your toes.

Whether the circular motion should be clockwise or counter-clockwise depends on whether you are in the northern or southern hemispheres. A clockwise direction is advised for Irish snails.

Important: WWN does not condone snail-licking.

Snail licking is considered a poor man’s trip. It gives an intense high that lasts a matter of minutes. Users constantly need another fix, with people taking up to 50 licks a day. Many addicts will go on binges spanning over four days without sleep, constantly searching for more snails on school walls and underneath large church bushes. Their lives become consumed by the snail licking, so much so that they are often described as being ‘zombified’ by family and friends. Users are constantly searching for their next fix, they don’t eat, drink or even watch Top Gear on Dave.

Dr Phillip Dwyer, a leading WIT medical expert on the effects of drug addiction, described how a person changes: “The absence of the drug is very bad because the sensation is so quick and intense. You become depressed, gaining the characteristics of a wet hanky. It completely transforms your personality to be more aggressive and also urges the user to tuck their tracksuit pants into their socks..”

A recent WIT survey has claimed that 6 out of 10 teenagers aged between 16 and 19 have already tried snail- licking more than once. The problem has now reached epidemic proportions in some parts of the city. Last week a 14 year old school boy was found ‘Shellakabuukied’ outside his local school by a passing Garda patrol car.

“He was so out of it that he didn’t even know my name.” stated Det. Terry Butler.

Many people point the finger at the current recession, citing huge unemployment and increasing poverty as the main source for the growing trend in the poorer communities of Newtown and Ardkeen. There are many factors: crap parenting, boring country, poor quality Television programming, Ryan Tubridy and Catholic priests: There are no other options for them and so they turn to licking snails to pass the time.

Josephine O’Brien formed this group after seeing her son suffer so much and with the apparent lack of help from anyone else.

“The government do nuthin boy. If they do catch anyone with a snail they just let them go, they consider it ‘personal use’ and simply take it off them. The snail is then released back into the system. The punishment isn’t severe enough,” she proclaimed.

“These young people are very ill. They need all the help they can get.” she added.

Mothers against snail licking is still not an official association as O’Brien and the other volunteers cannot afford the €6,000 needed to be registered. The group relies on donations and help within the community. Her 5 bedroom, semi-detached home has become much like a community centre for addicts and their family members.