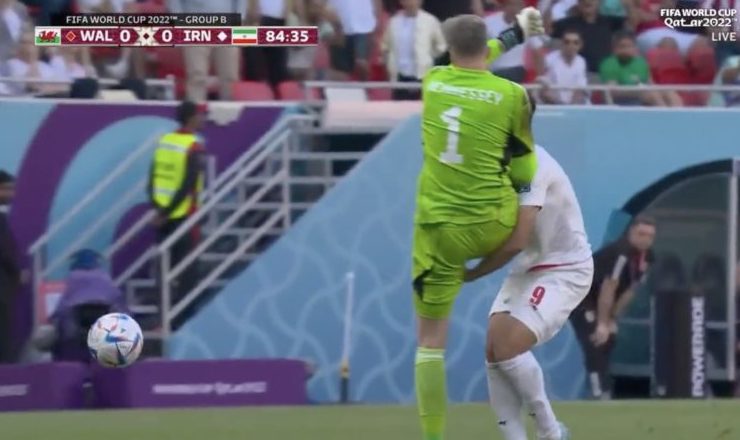 The result of the day saw Iran win 2-0 against a Welsh side that looked less potent than homeopathy. Irish fans couldn’t help but look on with envy and think had things been a little different in qualifying that could have been us being piss poor and losing to Iran at a World Cup.

A truly great player, Bale struggled to keep pace with the game as his fitness looked on par with the fat fucks on couches at home criticising his performance.

As Iran hit the post twice in a matter of seconds at the beginning of the second half, the Welsh defence began creaking more than the floorboards of a Victorian house in a horror movie.

The decisive change in the game came when latching onto a through ball Iran’s striker Mehdi Taremi had nothing but space in front of him. Whereas Wales keeper, Wayne Hennessey, leading with a high foot had nothing but murder in his eyes.

Initially given a yellow card a VAR review of the incident, in which Hennessey channeled his inner Bruce Lee, adjudged that Welshman had in fact ‘gone through him for a fucking shortcut’.

Iran’s breakthrough goal came in the 99th minute as Roozbeh Cheshmi struck the ball from outside the box sparking wild celebrations which laid bare the pressure felt by the players at a time when their government brutally oppresses their people. All the same a bit over the top considering it’s the World Cup, not Irish school’s rugby.

A second goal came shortly afterwards for Iran, perfectly setting up a derby versus USA in the final group game which is set to be spicier than your toilet after overdoing it on the Indian takeaway.

The evening kick off was the hotly anticipated 1776 derby between England and USA. After a rare performance of free flowing score-at-will football, Gareth Southgate sensibly reset England’s controls to ‘turgid borefest’.

England looked as useful as a glass hammer up front as their football reverted to type, leaving it to the USA to play all the soccer.

In an event rarer than the aurora borealis occurring in a kitchen, Harry Maguire actually had a good game.

Pre-game online chatter saw fans suggesting the loser would be forced to keep James Corden, with a draw meaning he is currently drowning somewhere in the middle of the Atlantic.

Starring in the first game Jude Bellingham’s performance this time around has Liverpool fans demanding the club go all out to sign Tyler Adams instead.

After being eliminated thanks to their 3-1 loss to Senegal, the Qatar Supreme Committee have confirmed they will no longer host the World Cup and everyone has to go home.

Already the most disappointing host nation in the history of the competition, Qatar now become the worst team in history with a less convincing performance than Michael Flatley in Blackbird.

Out of the tournament, Qatar can now turn their full attention to sorting out the fan accommodation villages where there is reports of sewage flooding.

Netherlands and Ecuador played out an entertaining 1-1 draw, meaning the number of people saying ‘Ecuador are my dark horse for the tournament’ has increased by 500%.

Cody Gakpo opened the scoring meaning he could be the next player after James Rodriquez to shine in a World Cup, secure a massive move and wages and then do absolutely nothing for the rest of his career.

A disallowed goal for Ecuador just before half time saw the referee surrounded by angry players in scenes reminiscent of Supermacs at 3am when they tell customers they’re all out of chicken.

Enner Valencia eventually equalised for Ecuador and despite becoming his country’s all time top scorer at the World Cup he will always be remembered for faking an injury in a game to avoid awaiting police who were there to arrest for unpaid child support. No seriously, look it up.

Elsewhere, Caoimhin Kelleher has been placed on the transfer list by Jurgen Klopp after footage emerged of him conceding a penalty against an 8-year-old.