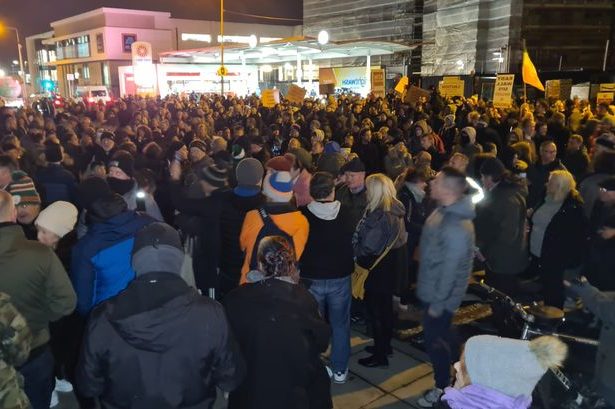 CONFRONTED with scenes of protests in East Wall over the plan to house of asylum seekers in a 380-unit building converted from an office block and growing presence of blatant racism on social media, the government has confirmed that this doesn’t sound like much to worry about.

“We’ve tried everything; we’d told people complaining about record homelessness and record high rents in Dublin that actually, they’re wrong when they say it’s more affordable in other countries and cities, and now people are saying we’re playing into the hands of right wing nationals. Ha! Ridiculous” confirmed a spokesperson for local councils, the Department of Housing and the coalition parties.

“You say there is a record high of 11,397 homeless people and to that I obviously say ‘Sinn Féin’. So you’ll excuse me if I reject the notion that we’ve been sleep walking into letting down people and creating fertile ground for hateful ignorance to fester, which will be used cynically by racists to stoke anti-immigrant sentiment,” added a government spokesperson.

“We announce budgets for housing and then don’t spend €476mn of it. Like, what do you guys want from us? Jeez”.

Some people have alleged that letting small sections of the public blame asylum seekers for every problem in Irish society could suit the government, something the coalition rejects outright.

“Ah c’mon now I’d like to go on record to say we are not nearly organised enough to purposefully set up an ‘us versus them’ dynamic between disenfranchised people and refugees to distract from the fact the State is to blame but we are absolutely capable of setting the stage for some far-right lunatics to do that,” said a spokesperson.

Also responding to accusations that it is failing to adequately deal with the provision of long term accommodation for Ukrainian refugees, the spokesperson denied such claims.

“I just can’t see where we can improve. Like, we’ve just put a call out to people who offered up their homes for Ukrainian refugees 9 months ago to offer them up again because we never bothered to get in touch with them first time now.”