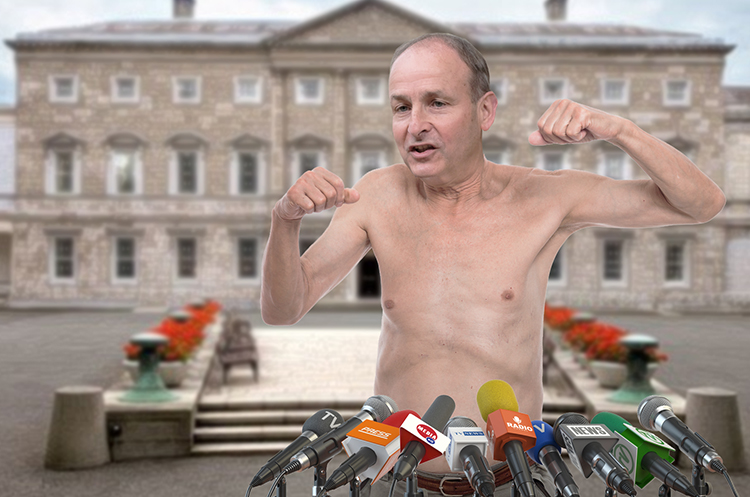 MICHEÁL MARTIN has once again let his famous temper and lust for public fighting get the better of him on the steps of Leinster House when at a routine media address he called out Vladimir Putin over Russia’s banning of over 52 Irish officials from the country.

“Very easy to play the big man in your little cartoon Kremlin castle, the hack of it, it’s another thing repeating shit face to face,” confirmed Martin, being held back by party colleagues. “And yeah I see you Yury Filatov, head on ye like a constipated shite, I’ll be coming for you too”.

Banned for their consistent condemnation of the invasion of Ukraine and war crimes committed there, the list of 52 names also includes the Tánaiste, Minister for Foreign Affairs, Ceann Comhairle, Marty Whelan, the cast of the Irish version of Gogglebox, the truck that reversed into the gates of the Russian embassy and Jedward.

“We’re talking mano e mano bucko, or are you are you too scared Vlad,” continued Martin, offering a ‘Cork rules’ bare knuckle boxing match, which allowed for the use of hurls with the loser paying for everyone’s Hillbilly’s.

This is the second time Martin has directly called out Vladimir Putin with the last time being prompt by the HSE data hack.

“I’ll give you a hacking, ye weapons grade langer. I’ve always said I’ll fight any man but this will be my first time fighting a little bitch,” said the Taoiseach, drunk on adrenaline, as he kissed his biceps before calling Putin’s mother something so vile we refuse to reprint it here.