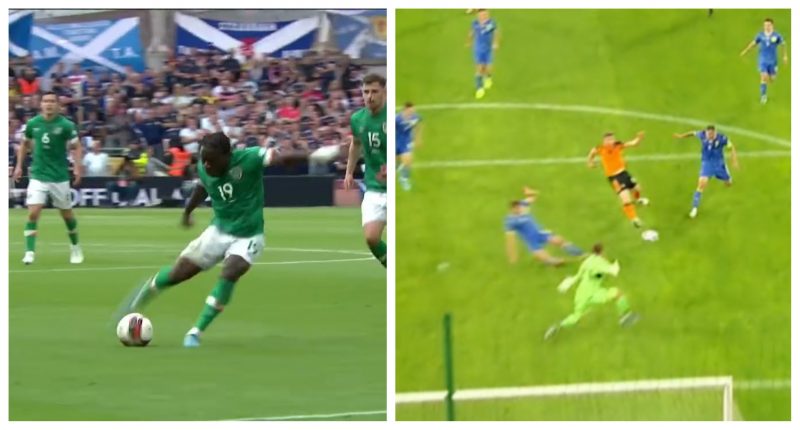 IN THE AFTERMATH of the ghost of Maradona possessing Nathan Collins during Ireland’s match against Ukraine, and taking into account Micheal Obafemi’s thunderbastard of a goal in the previous game against Scotland, FIFA have been left with no choice but to preemptively ban the Ireland team pending a doping investigation.

“There’s simply no other explanation for how an Irish team has scored goals like that other than pumping Colombian cartel quantities of drugs directly into their feet. Samba Soccer camps? Pull the other one,” said a spokesperson for the World Anti-Doping Agency, while carrying bottles full of Irish players’ urine away to be tested.

“These goals are the type that are so fantastic they lead to a spike in the birth rate and tens of thousands of people naming their first-borns Nathan, Micheal and Troy. I rang RTÉ to tell them they’d mistakenly put on a replay of the 1970 Brazil team,” added a FIFA exec, who noted it was also suspicious how few Irish players fell over or bumped into each other over the course the recent games.

Questions the FAI will now have to answer include ‘where did they get Pele’s DNA from and how did they convert it into a booster jab?’ and ‘fuck me, can you get Obafemi to show me how to hit a ball like that?’

“No offence but for years now you’ve been playing like you’ve been running through a mud slide with legs made out of discarded Lego pieces. It would be irresponsible and a dereliction of duty if we didn’t investigate this,” added a FIFA exec.

In other news, following England’s 4-0 loss to Hungary Jack Grealish and Declan Rice have asked if it’s too late to rejoin Ireland and become Obafemi’s bootboy.