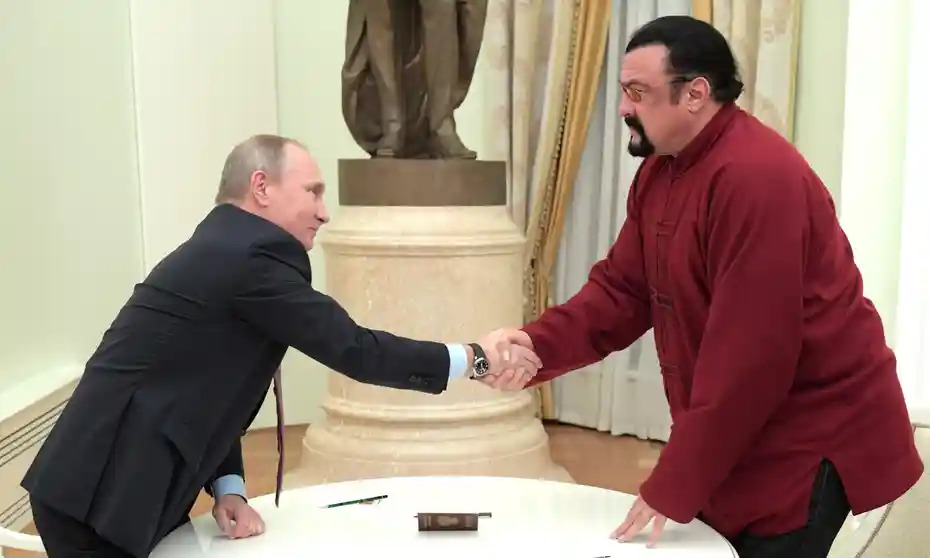 WITH VLADIMIR Putin looking like he might get enough stamps on his ‘contravenes the Geneva Convention’ loyalty card to qualify for multiple free trials at the Hague, the need to explore every option no matter how lethal must considered.

And since the international community seems to have shown no interest in imposing a no-fly zone over Ukraine or supplying planes to its pilots as Russia fires on a nuclear power plant, there is only one choice.

The West’s greatest asset, a sleeper agent so deep in slumber he may be catatonic – unleashing agent Steven Seagal is the only hope.

What is known about agent Seagal: the horrific dye job on his hair and beard is actually how he smuggled in lethal poison into Russia. Once he activates his sweat glands, presumably from intense exertion endured after a single failed attempt at a judo chop, what the Russians believed was shoe polish will drip from his head and poison anyone within 10 feet of Seagal.

But how to get close to Putin especially now is he conducting a war and so petrified of Covid he sits at tables longer than a fully annotated copy of Ulysses?

As a personal favour to ‘big fan’ Putin, Seagal will offer to recreate a famous Under Siege scene and burst out of a cake topless.

Putin’s birthday isn’t until October 7th so to justify the presence of a cake large enough to fit an aging and out of shape B-list movie star it in the icing will read ‘Happy ‘secret military operation’ which is absolutely not an illegal war and well done on it’s immense success aside from the significant Russian soldier deaths and tanking your economy’.

While some security experts do not hold out hope that Seagal, famous for an incident onset in which he allegedly soiled himself when choked unconscious by stuntman and martial artist Gene LeBell during a row, there seems little alternative.

“It’s this or hoping against hope that the promise of never ever having to buy yourself another pint in your life will be enough for someone in Putin’s inner circle to put a bullet in his head,” confirmed one expert.