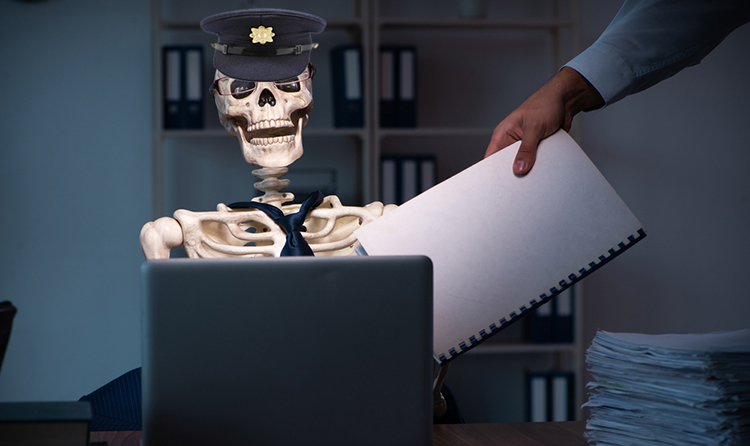 ACCUSED of allegedly leaking confidential documents relating to draft contracts between the HSE and GPs to a ‘not really a mate at all mate’, Leo Varadkar remains the focus of a garda investigation which has lasted well over a year.

Public suspicion and speculation remains high due to the long drawn out nature of the investigation into something Varadkar himself admitted to doing while providing copies of texts exchanged with not a mate Dr Maitiú Ó Tuathail.

Just what stage is the investigation at, and is their an end in sight and a file being prepared for the DPP? WWN tracked down the gardaí involved and demanded answers.

“You’re taking your time aren’t you?” we sarcastically posed as the opening shot in our tough-talking questioning, but officer Seán Skellington remained stubbornly tight-lipped.

“This isn’t large scale financial fraud, taking down a drug gang or solving a string of murders, what could possibly be taking this long?” we followed up hoping to gain answers for our readers.

Getting more irritable now at the silent treatment, we grabbed at Skellington’s collar only for him to collapse and shatter in a heap on the floor – anything to avoid answering a straight question.

“Are you being pressured from above to go slow on this? Is their political pressure to simply play the long game so we all forget about it? Damn it, the people need answers,” we screamed, to silence once more.

“We can see right through you buddy, and you might literally have a spine but figuratively speaking – you ain’t got shit. Shame on you!” we said, satisfied an Garda Síochána’s bones were shaking at the thought of dogged journalists refusing to let this story recede to the shadows.

No matter the questions we posed, Skellington remained steadfastly silent on the matter. Rather than a frustrating exchange, his silence must be admired as keeping the details of such a politically sensitive investigation in house is to be commended.

UPDATE: the Garda press office has assured us that whenever a politician has been made aware of the updated status of the investigation they will duly leak it all to the media.