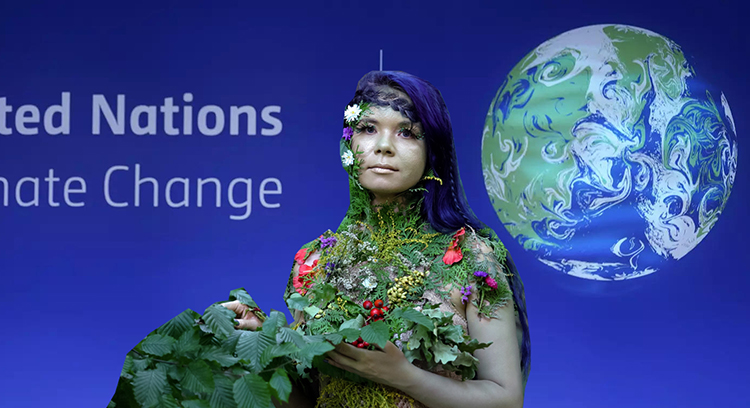 THE Earth Mother herself has made a surprise appearance at the COP26 summit in Glasgow, with plenty on her mind about how humanity has treated her over the last 200 years.

“I’ve been subtly warning humanity about this shit since the dawn of industrialisation to no avail, well, maybe they’ll listen to me now” said the mythical deity to reporters, before taking to the stage at the summit and giving the assembled world leaders a piece of her mind.

Points from the speech included:

– The ongoing erosion of the polar ice caps, which Gaia likened to “kids leaving the fucking door open despite being warned”.

– Coal-burning power plants, air traffic and motorists choking the skies with carbon emissions, “turning me into some sort of smoking room at the back of a shit nightclub”.

– Continuing deforestation of the rainforests, which Mother Nature had hoped would have ended after she commissioned Michael Jackson to write Earth Song back in 1995.

– The “mess youse are making of the sea” was a particular bone of contention, as Mother Nature tutted about how it was her “one good room in the house” and humanity has no business in it whatsoever.

– The proposal of a number of disasters ranging from huge volcano eruptions to earthquakes to severe flooding as a solution to the problem of their being “way more of you fuckers than I’d planned for”.

“It’ll be eviction or extinction if you keep this up, mark my words” she said in summary, as leaders from around the world basked in the awe of her splendour and beauty, while others caught up on missed sleep.