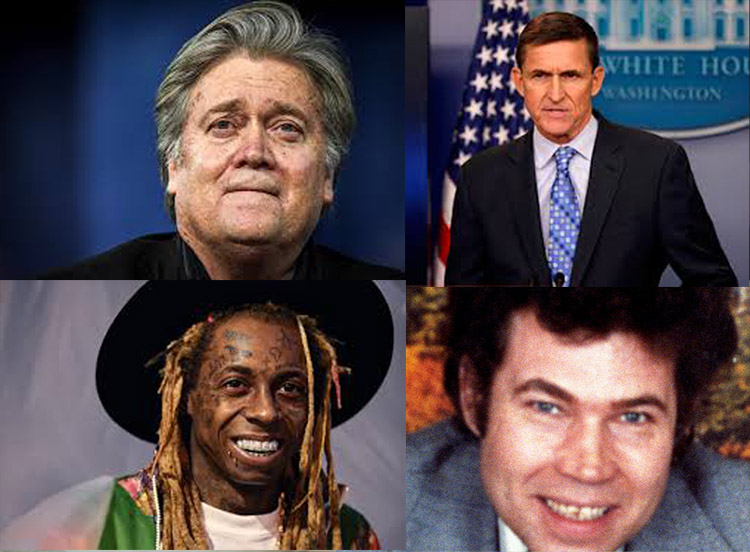 OUTGOING US president Donald Trump has been making use of his ability to issue pardons, with Steve Bannon among many others availing of close association with the president and crimes to be made free from federal prosecution.

With allegations that he is charging $2 million for a pardon are as of yet unfounded, WWN presents the rundown of who Trump has pardoned in this final blitz of executive power:

Former Trump campaign manager and barely sentient slug Bannon is now off the hook for allegedly fraudulently spending millions in Trump supporter’s money, taken from a fundraiser aimed at funding the building border wall with Mexico, on himself.

While it doesn’t appear Trump’s ability to pardon covers crimes in England, notorious serial killer Fred West is one of the most recent group of 73 people who received a presidential pardon – this one being posthumous.

Outlining his pardon for Mr. Puttin, Trump said the extremely American man bares no striking resemblance to any Russian leader he is aware of.

A posthumous pardon for the member of radical West German Volksfrei group. Played a central role in the siege of the Nakatomi Plaza in LA in 1988. Some suggest the damage to a large property development like the Nakatomi Plaza owned by a rival property group did Trump’s business no harm.

The brief viral sensation is now free from prosecution.

Despite aides explaining how movies and acting works, Trump has pardoned Theron for all the ‘crimes’ she committed her in role as killer Aileen Wuornos. A separate pardon was issued for her villainous turn in the Fast and The Furious movies.

A name that sticks out in the list due to the good standing of the pardon’s recipient. New Mexico chicken magnate Gustavo Fring has received a pardon, but the media remains unable to find any shady dealings relating to Fring, a charitable businessman and a fundraiser for local law enforcement.

A rumoured attendee at Capitol Hill unrest on the 6th of January. The military veteran and taxi driver was a prominent voice on far right message boards in the aftermath of the attack, seeming to turn on Trump for all his failed promises, the pardon is believed to be a panicked attempt by Trump to appease him.

The ‘Friday’ singer has finally had her sentence commuted. Not the only music related pardon as Lil, Medium and Large Waynes were all pardoned.