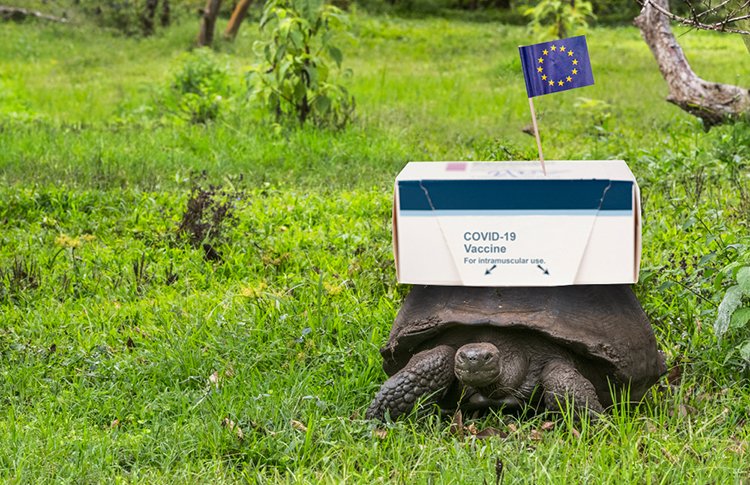 NATIONS belonging to the European Union have pledged to rectify the alarmingly slow initial rollout of its Covid-19 vaccination programme, which has been greeted with anger and frustration by citizens.

After a special task force charged with identifying possible errors and inefficiencies within the supply chain reported that delivering the vaccines on the backs of aging tortoises with arthritic hips and a poor sense of direction was probably not ideal, the practice is to be halted.

“Everyone’s an expert after the fact, yes the tortoises are bad but we didn’t hear anyone speak up when we said we’d use flightless penguins to fly the vaccines to Ireland,” confirmed one Brussels bureaucrat.

EU officials however defended their decision to hedge their bets by placing orders across a dozen vaccine manufacturers only for a few to gain approval, and to enter drawn out haggling with Pfizer/BioNTech.

“You put a bunch of Europeans into a room and don’t expect them to get turned on by the prospect of haggling?” Health commissioner Stella Kyriakides shared, before admitting that maybe the EU took it’s eye off the ball by increased activity in their ‘Shit talk Britain’ WhatsApp group.

In the last 48 hours the German and French governments have applied increasing pressure on Brussels officials, prompting the EU to pledge to rollout out the vaccine with increased haste.

“The vaccine will now be delivered by a select group of intelligent octopuses, each tentacle armed with needle-pointed pneumatic drills. We’ve increased initial supply by thinning out our current vaccines with some water like a teenager would do to their parents drinks cabinet. We’ll pick up the pace in no time,” confirmed Kyriakides.