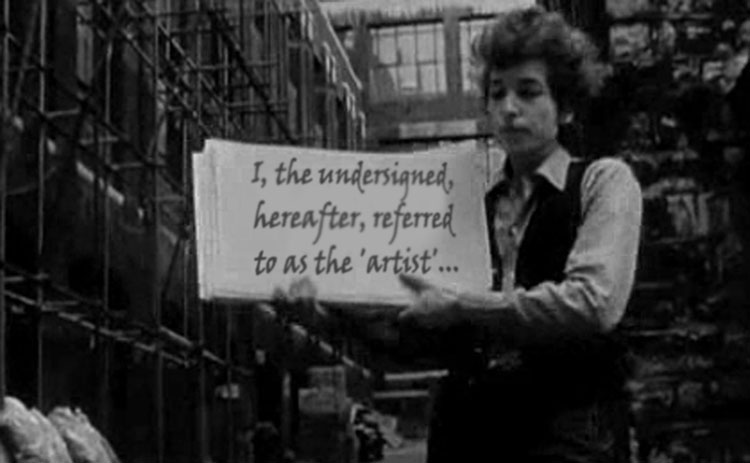 LAWYERS at Universal Music are today sorting out a mammoth contract comprised of thousands of A4-sized white cards as a deal to secure the entire back catalogue of veteran singer-songwriter Bob Dylan reaches a close.

“‘I the artist agree to zahabbada marshal the line’? ‘but only one time – shake it out’? There’s oceans of this shit” sighed one Universal intern, sifting through the reams of scrawled legalese that was delivered from Mr. Dylan’s office this morning by a man on a black moped.

“Normally we just row up to an artist with a truckful of money and then we own their music for life, we can do anything we want with it; sell it for ads for dog food, have the Minions sing it in commercials for erectile dysfunction, anything. And it’s very possible we’ll be able to do that with Blowin’ In The Wind too, once we drag 2,000 un-numbered placards into the right order and sign the bottom of it”.

Meanwhile Dylan, who stands to earn some $300 million from the deal, has remained tight-lipped about what, at 79, he hopes to do with the money from selling his 60-year back catalogue.

“This could all be part of an elaborate art piece that shows the fragility of art and the unstoppable march of business, trampling all before it. Or he could just want to round out his years in a big fuck-off house watching a massive telly playing Playstation 5 for the rest of his life” mused a source close to Dylan, adding that ‘this is the shit he’s always gotten up to’.

Once sorted, the placards sent to Universal Music are to be held up and read aloud by lawyers while Dylan himself plays the same chord over and over for an hour straight.