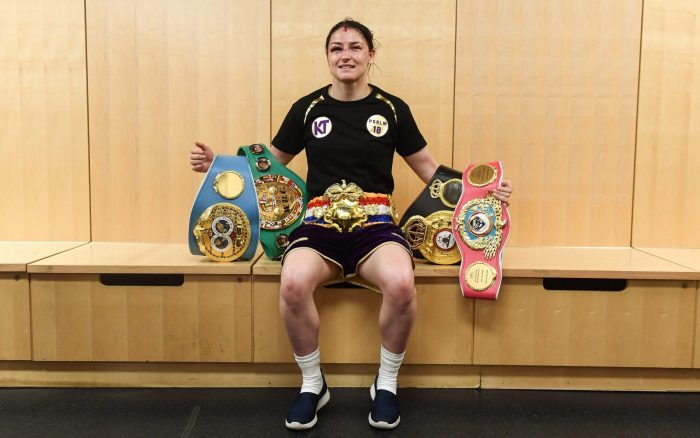 KATIE TAYLOR’S coaches are calling it the toughest and most demanding test of her career to date; adding enough bulk and mass so that lifting all her title belts doesn’t result in an instant buckling of her arms and shattering fatigue.

“Mandatory defences, unifying divisions, pummeling the head of a Spaniard for ten rounds; it’s all a walk in the park compared to lifting up all those belts,” shared Taylor’s corner man whose job includes operating the forklift on a reinforced floor which hoists Taylor’s belts up in the air during post-fight celebrations.

While Taylor may be the current WBA, WBC, IBF, WBO and The Ring lightweight champion the belts are far from lightweight, prompting the fighter to begin a grueling workout regime which makes carrying all belts manageable.

“That’s it Katie, 10,000 more reps you can do it,” one coach shouted encouragingly in the gym at 5am this morning, as another coach hooked a protein shake drip up to Taylor’s arm while another forced Taylor to simultaneously skip non stop in the middle of dead lifts.

“Shit, I think I’ve lost another five,” shared the corner man, unable to account for all of Taylor’s belts, “ah fuck it, she’ll probably just win another five next year”.

Many are calling for Taylor to be afforded the respect she deserves while being acknowledged as potentially Ireland’s greatest ever sportsperson but some are critical of such ‘hasty’ declarations.

“Ah c’mon now. Maybe after she’s launched a whiskey, decked an old man in the pub and been arrested a few times then we can talk about whether she’s the greatest or not,” mused one sports expert.