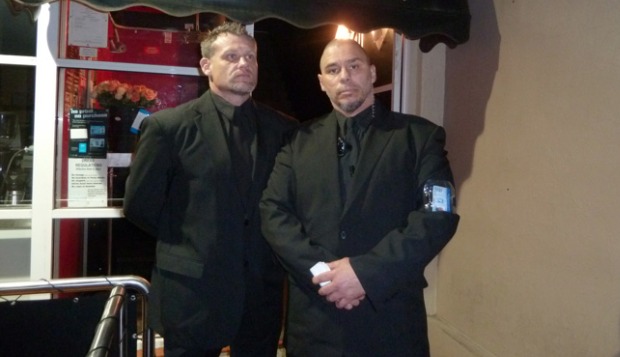 AHEAD of the imminent announcement that Dublin is to be placed at a ‘Level 3.5b/figure it out yourself, minus the square root of face mask’, authorities have strategically placed nightclub bouncers along the county’s border.

“Not tonight pal,” groused one of hundreds of bouncers all named Mick, to a desperate Dubliner trying to gain entry to the counties beyond Dublin’s border.

“It’s like the last helicopter out of Saigon here,” quipped one bouncer, as he clotheslined another Dubliner attempting to flee Level 3 restrictions which were still not entirely clear as the government remain incapable of telling its arse from its clear instructions.

Veterans of the now defunct Dublin night scene, the bouncers were deemed best qualified for the job of telling people to fuck off back home and our relishing the task at hand.

“Don’t bother with the sob stories. We’ve heard all the excuses; ‘oh I left my coat in Dublin’, ‘but all my friends are in there’, ‘I’m not drunk, this is just what someone with a proper Dublin accent sounds like’, ‘do you know who my father is’, they won’t work,” added a bouncer after turfing out someone who had a crudely drawn Dublin stamp on their wrist, written in mascara.

Dubliners, seeking clear guidance as to the nature of the new restrictions, have been warned to avoid government briefings at all costs and just wait for exhausted journalists to correct all the errors and contradictions with statements throughout the day.

As a precaution Dublin will now be temporarily removed from the Ireland group WhatsApp for at least three weeks, and the rocky road to Dublin has been closed.