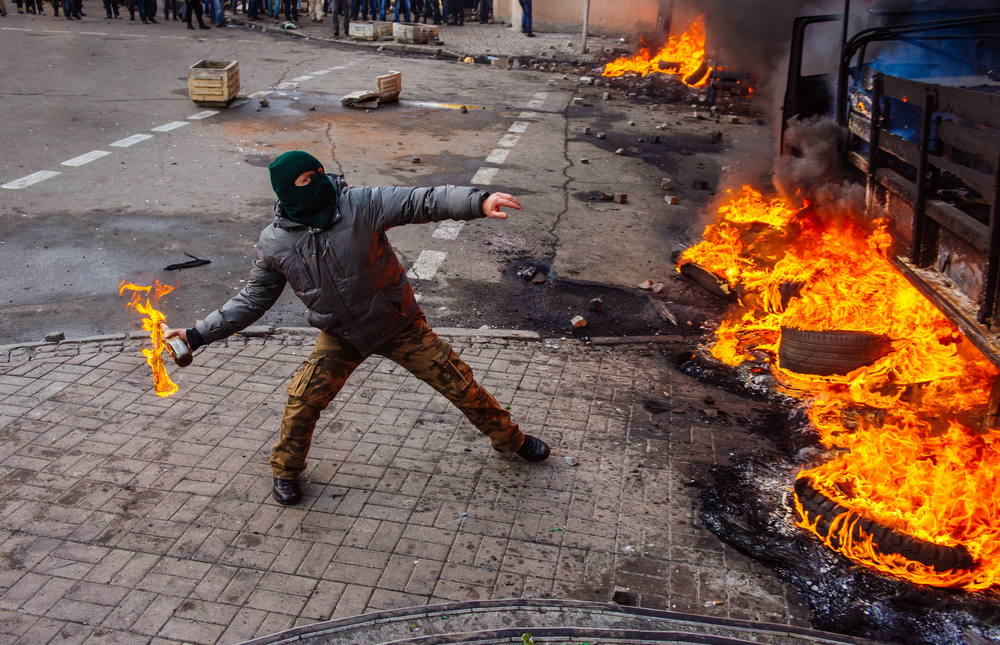 A DELEGATION from Waterford Whispers News attended last night’s undemocratic ‘rally’ for Sinn Féin, in a bid to expose the dangerous movement growing in our country following the recent general election which left us teetering on the brink of anarchy.

We assembled outside Liberty Hall before the doors opened, making sure to travel in numbers to both ensure our safety, and reduce the possibility that one of us may become radicalised into being a raging Shinner by the sick propaganda we were about to hear.

Outside, the assembled crowd talked hopefully about change, and the mood seemed upbeat. Poor bastards, we thought. They really have bought this bullshit.

As the doors opened and we took our seats, we began scanning the area for signs of trouble. There were several people wearing woolie hats, which we were certain were actually roller-up balaclavas. Umbrellas could very well be swords.

Mary Lou McDonald takes to the stage and the place explodes. Not, car-bomb explodes. Not the traditional explosion that you think of when you think of Sinn Féin. This is an explosion of applause. These people have drank the SF Kool Aid. They are all-in, pot-committed on this whole ‘left led government’ nonsense, the poor bastards.

“Up the Dubs”, shouts Mary Lou. This is the last sentence she speaks that we can agree with.

“We won more votes than any other party, and I want to thank each and every one of you for getting out there and voting”. Sinister, anti-democratic rhetoric, if ever we heard it.

She goes on to promise everything that was stated in the Sinn Féin manifesto; housing, healthcare, a USC cut… all without mentioning how they’re going to pay for it without taxing the wealthy.

Throughout all this, Pearse Doherty and Eoin Ó’Bróin sit beside Mary Lou onstage, possibly just waiting for someone to show a pro-FF/FG sentiment so they can beat the shit out of them like the savages they are.

Speaking of which, Mary Lou moves on to Fine Gael and Fianna Fáil, discussing their unwillingness to engage in a government with her party. It’s amazing to see such delusion in action; ML truly believes that her party has a place in government. Has there ever been a time where a party other than FF or FG have been in power? Why on earth would anyone think there should be one now?

Doherty takes the mic next, prattling on about vulture funds and insurance chiefs… change the record, man. Can’t you accept that it’s not rich people driving up house prices or gouging people with insurance costs? It’s dole heads and slip-and-fall merchants! We should know, we saw the ads from the last government stating exactly that!

Following a fawning Q&A segment from the brainwashed drones in the audience, the night ends with what else but a rendition of Amhrán Na bhFiann. Sheer, unadulterated populist nonsense, and a blatant attack on our democracy.

This publication for one will not be joining Sinn Féin on this madness; we know what side our bread is buttered, thank you very much. We’ll stick with the real parties, the ones who may have had a few wobbles over the last few years, but who are the only people who don’t have to lower themselves to ‘marches’ or ‘rallies’ or ‘gatherings’ or ‘public meetings’ or any such nonsense. So long, Sinn Féin! Nice knowing ya!