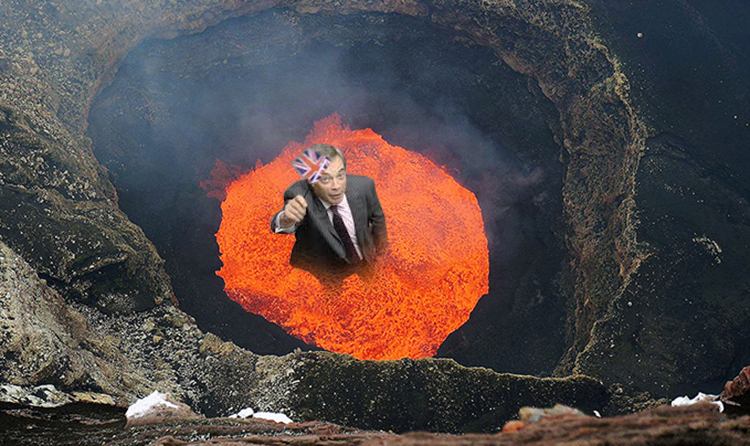 SLOWLY descending into the fiery bowels of hell while enthusiastically waving a miniature Union Jack flag, Nigel Farage has completed his life’s work and is to be welcomed into the piping hot bosom of the Devil, now Britain’s exit for the EU is secured.

“My work here is done. Don’t cry because it’s over, cry because you’ll bear the brunt of the pain and I’m going to make millions,” Farage told his teary-eyed leave-voting fans as the bubbling lava emerging from the cavernous hole in the ground enveloped the chief proponent of closing the UK off from the world.

Farage’s descension comes after British MEPs’ final appearance in the European Parliament during which the Brexit Party owner spoke passionately about looking forward to all the damage Britain will suffer in the areas of humans rights, deprivation and inequality among other unimportant things.

“Fear not for me my children… because my actual children have German passports and I, a hefty MEP pension,” the serene looking anti-immigrant, pro-polite racism politician continued after a long and illustrious career in sewing suspicion like a racist seamstress.

“I usually leave it up to the arsehole upstairs to make grand gestures like this, ascension to Heaven this, ascend to heaven that” explained the Devil of his decision to call Farage downwards to his eternal home. “But Nige, to be fair, he’s knocked it out of the park; the magnificent cunt. A magnificunt if you will. So it’s only fair he gets his reward”.