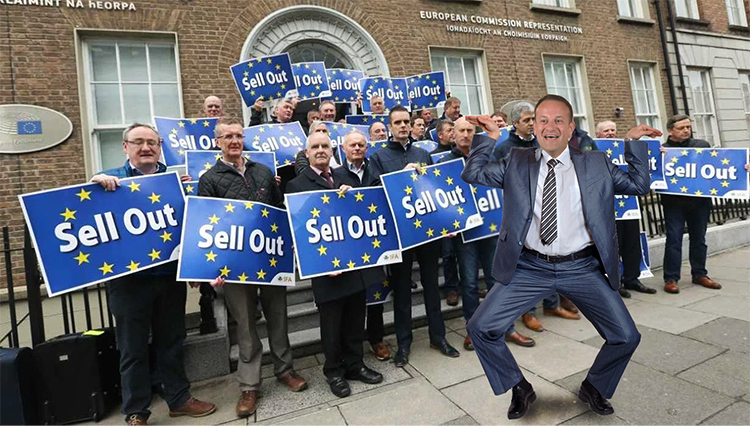 SHOWCASING his deft interpersonal skills which sees him easily break through barriers and cross all divides based around political, religious, cultural and social backgrounds, Taoiseach Leo Varadkar has become the man to solve the intractable issues surrounding Ireland’s beef disputes.

Beef farmers unhappy with the money they receive from big corporations and the seeming indifference of the government have softened their stance and had their cold hearts thawed out by Varadkar, with the very definition of a ‘man of the people’ removing the need for tense Beef Market Taskforce meetings.

“You culchies. Like dance. Country. Music.” the Taoiseach ventured in an unannounced and unofficial meeting with beef farmer representatives, careful to speak slowly and clearly so the clearly slow farmers could understand.

Donning spotless wellies and a flat cap with the price tag still on it, the Taoiseach aimed to bridge the invisible gap between his government and the working farmers of Ireland by ‘speaking their language’.

“I…Taoiseach” Varadkar now said pointing to himself, “you simple beef farmer. You get good price from industry. No more culchie complain. Makes much problem for me. Mercosur also good,” he continued before pressing play on a boombox he brought with him to the farm.

Now playing a nondescript abomination of a country song, the Taoiseach then began to dance a passable version of the hucklebuck, all while maintaining eye contact with the farmers and occasionally winking by way of saying ‘see, we’re not so different you and I’.

Elsewhere, all units of the Garda Emergency Rapid Response Units were called to a farm in Offaly where it is believed a man has been issued with a record number of threats to life in the last few minutes.