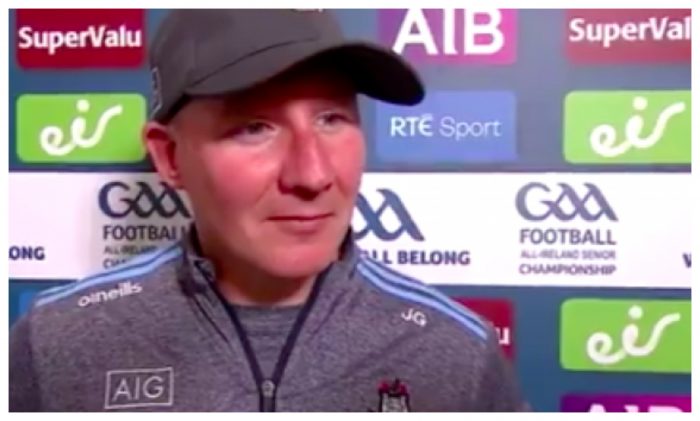 SUPPORTERS who complained of football becoming predictably boring and boringly predictable could always rely on the one saving grace the sport had, Dublin manager Jim Gavin’s electrifying persona in media interviews, but now GAA is set to truly become a joyless and dull charisma free zone in his absence.

While some counties are celebrating the chance to lose to Dublin under new management, the irrepressible joie d’vivre that dominated Gavin’s exuberant tenure as Dublin manager will missed by the vast majority of fans who can’t deny the Clondalkin man’s place among the greats of the game.

Displaying all the hallmarks of his indelible humour, bravura charm and endless witticisms Gavin confirmed ‘I am resigning as Dublin manager’ in a 6-word ebullient speech for the ages, leaving the GAA community fearing for the ebullient.

GAA reporters and post-match interviewers will breath a sigh of relief however at the news that the endlessly talkative manager won’t keep them hostage for hours of open and free flowing conversation. Gavin’s term as manager will cast a long shadow with his influence reaching beyond just the GAA.

“The rumours are true, Jurgen Klopp, him off the soccer, flew in a few years ago to get a masterclass from Gavin on how to have an outsized personality that lights up everything it touches. And you’d want to have seen Jurgen’s face when he was told Gavin did this all for… free,” shared one fan, who can’t see himself watching the championship next year now it has lost an exploding confetti canon of a personality.

With Gavin gone Dublin remain favourites to lose in the opening round of the Leinster Championship to Wicklow by 20 points.