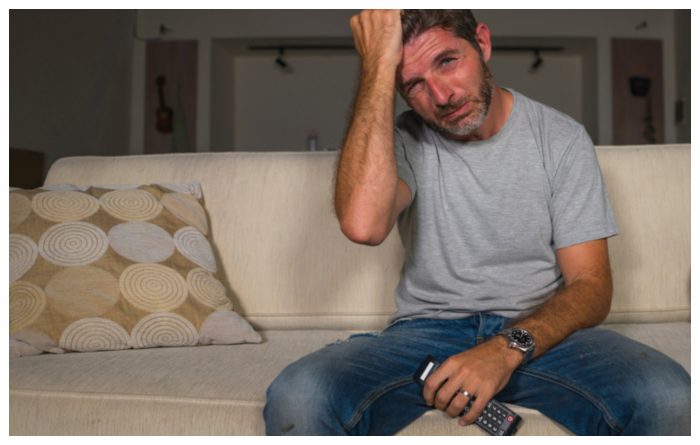 WATERFORD man Sean Healan has resolved to ‘stay strong’ and not show any emotion following the cancellation of long-running fashion, entertainment and gossip show Xposé, which has been axed as part of a Virgin Media Ireland revamp which Healan describes as ‘a fucking outrage’.

Since its inception in 2007 on TV3, the then-daily show heralded Healan through a difficult period of unemployment, where he would find some comfort in his otherwise mundane and monotonous day by settling down in the middle of the day for a cup of tea, a biscuit, and 30 minutes of attractive women smiling nicely.

Although the show has been on the decline since it made the switch from every afternoon to one night a week, 35-year-old Healan has stated that it still brought a smile to his face to see Glenda Gilson cheerfully announce Kim Kardashian at a red carpet event for sick dogs or whatever the fuck it was.

“From 2007 to 2013, Xpóse was a ray of sunshine for unemployed young men like myself,” sighed Healan, perusing the new VM1 line-up.

“The recession left us all feeling worthless, half our mates were in Australia, we didn’t have any jobs or any direction, everything seemed bleak… but then you’d see Lisa Cannon in a lovely dress being all cheerful, and it would really warm your heart. You’d feel better after it. And now it’s gone, just while it looks like the country is heading into an uncertain financial future thanks to Brexit. If another recession hits, what then? The new schedule has no Xposé and Ireland AM is a half an hour longer. What the fuck good is that to anyone?”

Healan joins thousands of men across the country today in silent mourning at the passing of Xposé, all of whom are frightened to open up about their feelings in case their mates slag them off.