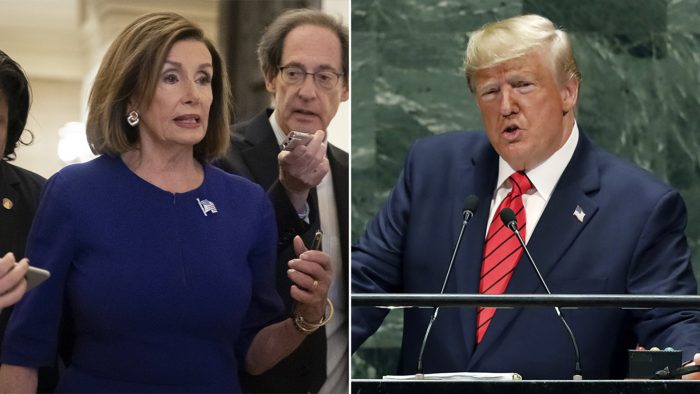 US DEMOCRAT politician Nancy Pelosi has been the subject of explosive revelations from US president Donald Trump, who claims her decision to begin impeachment proceedings against him are motivated by nothing else but a naked desire to see him held accountable for the many times he is alleged to have broken the law.

“If I hadn’t openly admitted to breaking the law, Pelosi would never have done this. She’s being so unfair,” an upset Trump said of the multiple times he’s appeared before the media’s cameras in recent days and spoken candidly about lobbying the Ukrainian president to help damage political rival Joe Biden.

Shameful Pelosi’s flagrantly biased decision to pursue a president for breaking the law has led to further embarrassment for the Democrat, after the White House released a ‘transcript’ of the phone call, at the instruction of Trump, in which it is once again kind of made it very clear there is grounds for impeachment.

Appearing on Fox News to plead Trump’s innocence, Trump’s lawyer and former mayor of New York City, Rudy Giuliani, accidentally admitted that not only is Trump definitely guilty of what he’s accused of, but that he also put the screw in the tuna, is the Zodiac killer, Jack the Ripper and shot both Tupac and Biggy.

“There has been no US president treated as badly I have been,” Trump tweeted, forgetting that several former US presidents who were literally assassinated might disagree with his characterisation of the treatment he’s receiving for breaking the law.

“You’ve gotta ask yourself – why would the Democrats use this information to see Trump held accountable? Making a politician in power pay for their illegal acts is just so profoundly un-American,” shared one Trump supporter, who values certain parts of the US Constitution he agrees it when it’s convenient for him.