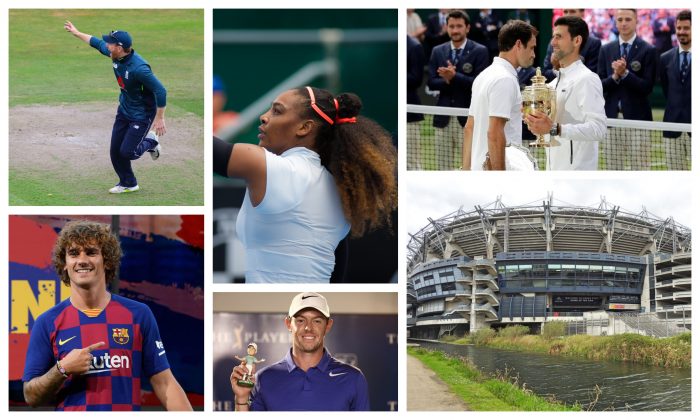 WWN Sport is here to bring unparalleled insight, opinion and coverage of all the big sporting events from the past 48 hours. A thrilling and action packed weekend is recapped below:

Ireland have won the cricket World Cup*. Yeeeow, gwan the boys in green!!!

After an epic 5-sets, Novak Djokovic emerged the victor against Roger Federer which is pretty fucking mean if you ask us, like, what has Roger done to deserve this? Bullying is what it is. Did you not see how upset he was. Just let Roger win, fuck sake.

In football, the long drawn out Antoine Griezmann transfer saga has come to an end, with the Frenchman signing from Atletico Madrid for Barcelona for the sum of €120 million. UPDATE: Atletico are suing Barce for tapping up Griezmann.

At the press conference announcing his signing Griezmann reiterated his desire to spend the majority of his career having shit haircuts despite his presumed access to the world’s top barbers.

In GAA, Diarmuid Connolly made his return to Dublin’s All Ireland panel providing your dad with an opportunity to spout off about ‘them Dublin scumbags’ for 30 minutes longer than usual. Elsewhere, Mayo are breaking their supporters hearts and maybe it’s time to move on, travel the world, grow as a person, find yourself a county that doesn’t do this to you time and time again.

The overwhelming success of the Super 8s format which has been criticised by zero GAA fans has led GAA big wigs to consider expanding the format to a Super 32.

The British Open kicks off this Thursday in Portrush Co. Down, giving residents of Great British a rare glimpse at something called ‘Northern Ireland’.

*Well, if you’re one of those killjoys that insists on ruining everyone’s fun, then okay, technically only one Irish person won it…how? Well, he was playing for a different country…it’s not important who he won it with. No, no, no, don’t Google it, the internet won’t have anything on there about…yeah, fair cop, it was England but, look at it this way, the Brexit voting conveyor belt of bellends will hate that not only was he Irish, he was the captain too!