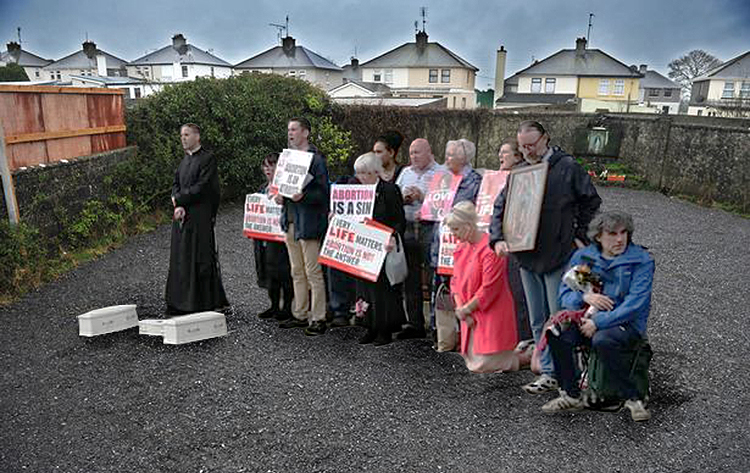 AN ANTI-ABORTION group who held a demonstration outside the National Maternity Hospital have confirmed they are planning ‘fuck all’ protests for Mother and Baby homes sites across the country.

The Our Lady of Lourdes Protectors group, who staged a demonstration with three white child-size coffins, defended their decision to protest while pregnant women of all ages and medical complications attended the country’s biggest maternity hospital.

“Our opinions and beliefs come first before any personal circumstance,” group spokesman Charlie Browne told WWN, “so what better way to express our beliefs than placing three baby coffins outside a maternity hospital packed full of women about to have babies, disregarding the pain some of these women may be feeling after losing a child, naturally, or otherwise”.

The group said it was planning another such protest this Saturday, but declined to respond when asked why it wasn’t protesting at sites like the Catholic Church run Mother and Baby homes where young children were discarded like diapers into septic tanks, or even campaigning for homeless children, children in care and awaiting fostering or adoption.

“The Tuam babies weren’t aborted, they died from harmless stuff like illness, being starved, beaten and left to die because they weren’t God’s children,” Browne defended, blessing himself at the thoughts of a child being born out of wedlock to a filthy woman.

“Surely there’s exclusion zones around these Mother and Baby home sites anyway, and besides, we only care for hypothetical children before they’re born, not after,” he concluded, just before shuddering at the sight of a single mother passing with her 3 kids.