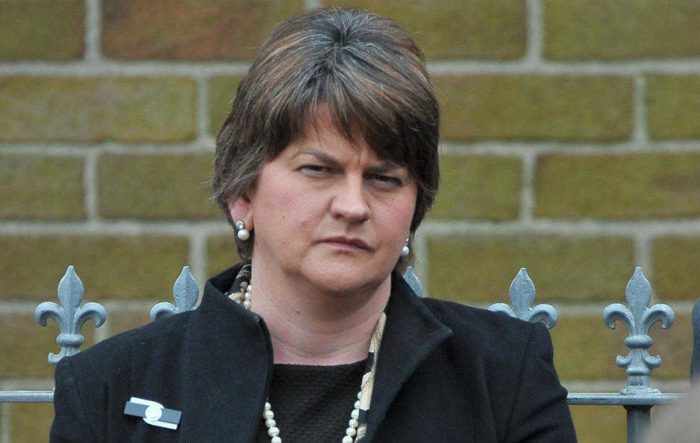 DESPITE a House of Commons vote putting the legalisation of same-sex marriage and abortion in Northern Ireland a near certainty if power-sharing isn’t restored by October 21st, the DUP are taking the news surprisingly well.

“This is all that gay cake’s fault,” fumed Arlene Foster, leader of a party that set Northern Ireland on this path with its own corruption in the Cash for Ash deal scandal which caused a Stormont stalemate.

“We’re being aborted by gay marriage,” raged Foster’s DUP colleague Ian Paisley Jnr on a crackling Skype connection from his office in a luxury resort in Sri Lanka.

“Christ above, imagine the shite weather God will punish us with now,” added Sammy Wilson, who was so enraged he transformed into a red orb of pulsating goo.

The DUP’s astute understanding of the political situation in the 6 counties comes hot on the heels of them propping up the decaying corpse of the Tory Party in Westminster who offered the DUP a £2 billion deal in exchange for helping to economically decimate Northern Ireland.

The prospect of abortion being adopted in Northern Ireland comes after decades of campaigning by citizens and civil action groups. Abortion in Northern Ireland currently falls under the Offences against the Person Act 1861, meaning its women could see their health care rights emerge from the 19th century soon, and when combined with a successful vote in favour of same-sex marriage there are fears people will never stop laughing at the DUP.

The question remains, however, if the DUP hate women’s rights and gay people enough to return to power-sharing with those ‘Fenian bastards from Sinn Féin’.