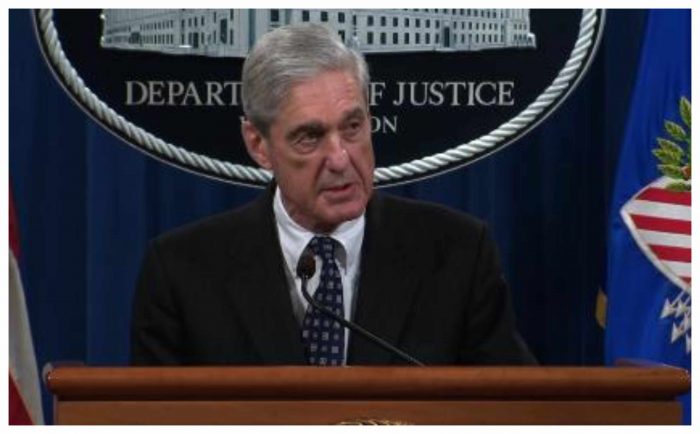 IN A LENGTHY address seemingly aimed at providing clarity around the investigation he conducted, special counsel Robert Mueller held a press conference in front of awaiting media at the Department of Justice concluding his address with what sounded like a coughed ‘Trump is guilty’.

Almost spluttering the words out of his mouth it has been interpreted by many that Mueller wanted to make clear to the media what he thought he had already made clear in publishing an extensive and detailed 448-page report.

In the report Mueller outlined 10 instances which laid bare President Donald Trump’s attempt to obstruct justice, asking witnesses not to testify or modify what they were going to say to officials conducting the investigation.

“Sorry Mr. Mueller did you just cough ‘Trump is guilty’?” a journalist asked Mueller as he made an attempt to leave the room.

“Don’t be ridiculous why would I say Trump is guilty? What a crazy thing to assert,” Mueller said, careful to emphasis certain words while winking at journalists, then silently mouthing ‘sooooo guilty’.

A series of large scale fireworks spelling out guilty were then set off in the room but were thought to be unrelated to Mueller’s address to the media.

Stacks of the report conducted by Mueller were then handed out to journalists and forwarded to members of Congress with specific passages highlighted to look at and read, and to avoid confusion and improve clarity they were heavily annotated.

Elsewhere President Trump confirmed his complete innocence, prompting the media and leading politicians to just leave it there then.