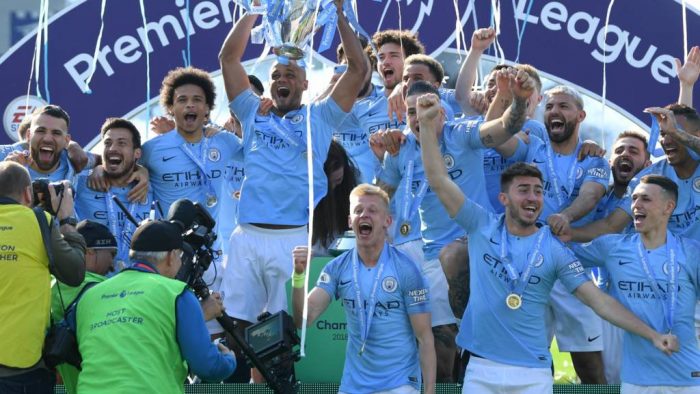 SUNDAY brought an end to yet another thrilling edition of the Premier League with Manchester City winning the league. WWN Sports casts an eye over the season’s big winners and big losers.

Well, because, they won. That’s how this thing works.

This year represents the first ever year the Premier League has commissioned a second place trophy, such was the fantastic achievement of Liverpool not winning the league. This move has been praised as it will bring an end to Liverpool fans having to explain for hours on end why finishing second as good a feeling as winning the league for the first time in 29 years would have been.

You would gladly read over 17,000 words on what an abject season United have endured but honestly, it’s more time efficient to just laugh maniacally for 9 minutes uninterrupted.

£21.6 million and counting in wages since the former footballer joined from Arsenal in January 2018.

You’ve scoffed and laughed at their ubiquitous attempts to get you to place a cheeky wager on how many corners there will be during the first half of an important Conference North game between the teams lying in 9th and 15th but the jokes on the betting companies because even though you’re €5,000 down for this season you can quit any time you like.

Brighton sacked the Irishman this morning after stating staying up in the Premier League for a successive season isn’t good enough. It is presumed Brighton will now go on to finish in the Champion’s League spots next season playing irresistible football with the exact same squad.

A fan who has reached the age of 12, widely regarded as the cut off for changing allegiances from one club to another, tragically didn’t leave Man United in time for a more successful rival at the start of this season and is therefore not allowed to to reinvent himself as a Man City, Liverpool or Spurs fan at the start of next season.

Never has a season needed such a high volume of helium to be pumped into TV studios in England. No season in living memory has required Gary Neville and 300 other ex pros to appear exasperated and incredulous so frequently, meaning high pitched and frenzied screaming was at all time high.

“I use to make the bulk of my income blowing up balloons for kids’ birthday parties but now I get a call to supply 10 canisters over to Sky Sports every day because they need to shout and argue for 3 hours about how different the modern throw in techniques are when compared with the mid 90s and how that’s the bed rock of modern pressing” confirmed Alan’s Party Supplies owner Adil Chandra.

Those who earlier in the season at various stages called Guardiola a ‘joke’ who should be sacked for falling 7 points behind, accused Mo Salah of being worse than Andy Carroll, said Ole Gunnar Solksjaer was the greatest manager this century have been thrown a life line in the form of everyone having terrible memories.

Luckily for all members of your WhatsApp group, they have been able to emerge at the end of the season saying the exact opposite or what they had claimed at various points of the season without being called out on it or feeling any guilt about not having a clue about football.

Sure, you probably did something more ‘productive’, keep telling yourself that.