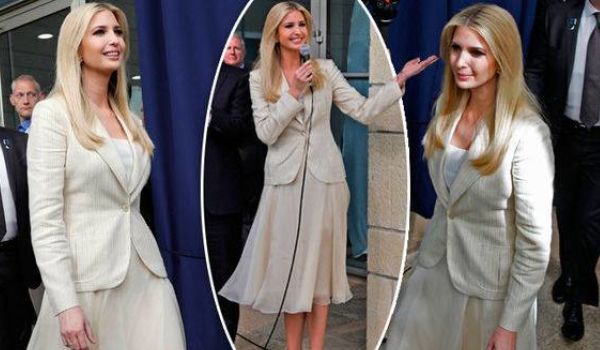 IVANKA TRUMP straight up killed it in this demure two-piece in Jerusalem at the opening of the new US Embassy, in an outfit that will go down in history, infamous for being just the right side of very classy, formal chic.

And those wondering what great cost the opening of the new Embassy came with, don’t worry, Ivanka’s modestly modest outfit came in at around $5,000 which is no cost at all when you think about it.

Those fearing Ivanka would bomb in the big diplomatic fashion stakes were wrong as the off-white, deathly pale Ralph Lauren jacket was part of the perfect statement outfit which screamed out in agony “no matter the occasion, Ivanka sure looks great and that is perhaps, the most important thing to take from her visit after the fact scores of Palestinians have been murdered and thousands more injured”.

The first daughter slayed, slayed and then slayed some more alongside her husband Jared Kushner, and Israeli Prime Minister Benjamin Netanyahu, and despite multiple speakers praising the US’s decision to move its embassy to the disputed Israeli capital of Jerusalem, our eyes were drawn again and again to Ivanka, as we zeroed in, as if she was in the crosshairs of fashion greatness.

Deftly demure, Ivanka could have unintentionally made a satorial sacrifice and have to mourn the death of her fashion icon status, but thankfully killing it is something that’s now just intrinsically linked to US President Donald Trump’s eldest daughter.

While her husband, Jared, is tasked with brokering peace between Israel and Palestine, we can’t help but feel like people went away yesterday thinking only of how Ivanka killed it, in fashion terms.

NOTE: We regret to inform readers that we have just learned of the tragic circumstance of our Fashion Finder software, which allows you to click on photos featuring Ivanka and other celebs’ outfits and shop for similar outfits online, is currently not working.