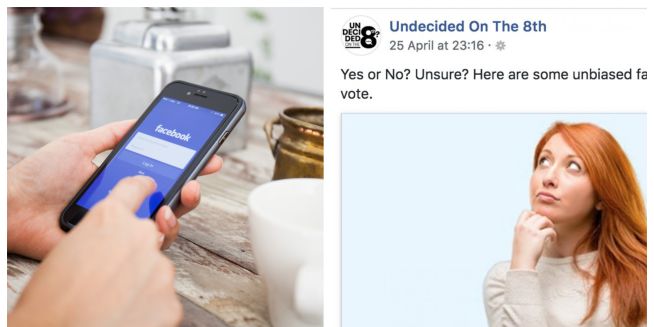 IF YOU have a even the most rudimentary understanding of ‘news’ and reading it, then you will be well aware that Facebook has officially banned paid foreign pro-life ads filled with demonstrably false claims and lies from flooding the newsfeeds of Irish Facebook users.

Weeks after several Irish journalists highlighted examples of US paid for ads sharing wildly inaccurate information via paid for prime position in your newsfeeds, with one ad even masquerading as an RTÉ news report, Facebook yesterday took the step to ban them. Today Google and YouTube outright banned all ads related to the referendum in response to adverts lightly sprinkled with false claims from US pro-life organisations.

As a result of these actions you may be experiencing very palpable panic at the thought of being starved of misleading lies, made up stats and should-be-illegal dishonest claims. So, where to go to fill that foreign Facebook ad shaped hole in your voting heart? Don’t worry, WWN’s got you covered:

Don’t worry, your taxi driver has you covered for all your examples of how ‘women do be just getting the abortions for the craic of it’. Fear not, for if anyone makes polite requests for them to look up the X, Y, C case or Miss P case they will ignore it and continue spreading false information, so you can rest easy.

No we wouldn’t have thought it either to look at her, but your neighbour is on 24 hour call in the case of anyone needing to hear an anecdote or scare story about how even though the upcoming referendum is about the repeal of the 8th Amendment, it is actually secretly about how over in England having abortion is an Olympic sport, nevermind the stats about the steady decline in rates of abortions across Europe.

YouTube, Twitter, Facebook, news sites, no matter where you look you’re never short of options for someone willing to hand over false information, free of charge. In case you’re worried you might learn something worthwhile or stay informed quickly scroll passed an article and straight to the comments, here, you’ll find many people telling you all about murderers.

4) Have a gander at a poster

Thought you’d be deprived of baseless propaganda now that foreign ads, disguised as well-meaning impartial information, can’t be placed in your newsfeeds. You can stop sweating, there’s some good dishonest homegrown wildly misleading posters which can help you stray further and further away from what the actual referendum is about.