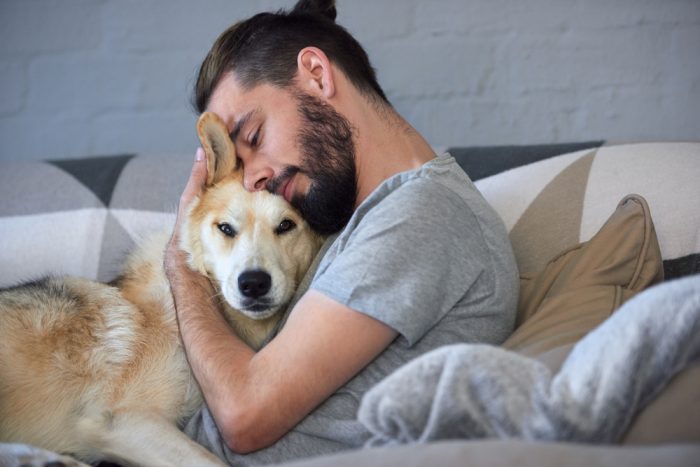 BURYING in his head in his paws for what must be the 1000th time this year alone, a Waterford based dog has found that when it comes to the demeanour and behaviour of his owner, Michael Dreary, expectations can never be lowered enough.

Casper, a 4-year-old mongrel, is struggling to live with the day-in, day-out reality of being owned by a loser so pathetic that he is embarrassed to be seen out on walks with him by other dogs.

“Seriously, just look at the fucking hack of him,” Casper said aiming a paw in the direction of Dreary (32) who lay prone on a nearby sitting room couch.

WWN spent an afternoon in the company of the canine and his owner, and soon learned of Casper’s growing annoyance at being owned by such a loser.

“It reflects badly on me, ya know, like, other dogs thinking ‘how could you let an eejit like that own you?’ Always strolling around in tracksuit bottoms hanging off his arse, terrible posture, and always spitting on the ground. That’s just what other dogs see when we’re out for a walk but it’s so much worse at home,” Casper explained.

The dog describes a daily routine of having to sit and watch Dreary return from work and reheat yesterday’s takeaway while obsessively browsing through social media posts belonging to exes.

“And he’s always playing random lads on FIFA online. The swearing out of him, he’s like a child when he loses. And there’s the picking his nose and scratching his arse. What 32-year-old man watches The Teenage Mutant Ninja Turtle movies once a week. Do you want me to stop, ‘cus I can go all night with stuff on this loser,” Casper enthused, before considering running away from home for the 12th time this week.