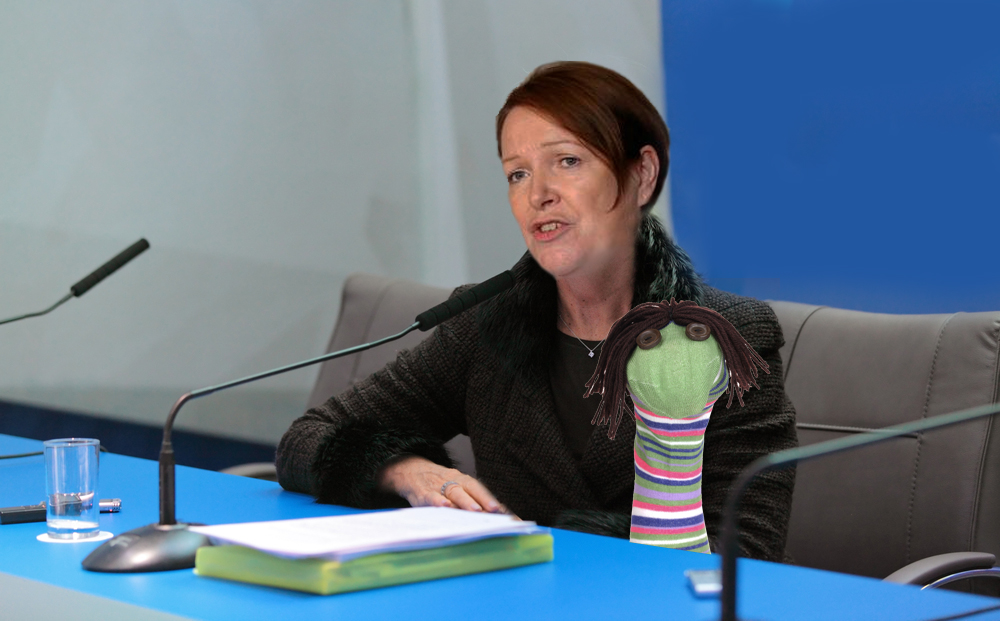 A FRUSTRATED Judge Charleton has pleaded with former Garda Commissioner Noirin O’Sullivan to deliver her evidence to the Disclosures Tribunal in a straightforward and clear manner, after she once again used sock puppets to answer questions.

While the use of puppets is a vast improvement on her first day of giving evidence, when O’Sullivan answered every question with another question, only posed in Greek, and said backwards, O’Sullivan herself maintains she will cooperate with the tribunal in any way she can.

O’Sullivan’s evidence has been criticised by many for being purposefully vague and evasive when relating to the matter of instructions she gave to a legal team to go after whistleblower Sergeant Maurice McCabe’s ‘motivation’.

When question after question was put to O’Sullivan by counsel for Sergeant McCabe, former minister Michael McDowell, O’Sullivan chose the medium of sock puppetry to answer in an honest and straightforward manner which left no one in doubt as to what she was saying.

“What the fuck is this crap,” confirmed one attendee at the tribunal, who presumed a witness would have to at least talk in concise and cogent sentences.

As O’Sullivan’s evidence continued, her hand, dressed in what looked like a stripy sock, danced gaily on the desk in front of her in response to a series of probing questions.

Made aware of how O’Sullivan was seemingly going to great lengths to avoid providing a helpful account of events to the tribunal, government officials were quick to criticise her offensively evasive display.

“Do you think she’d be interested in running in the next election for us?” one Fine Gale insider shared.