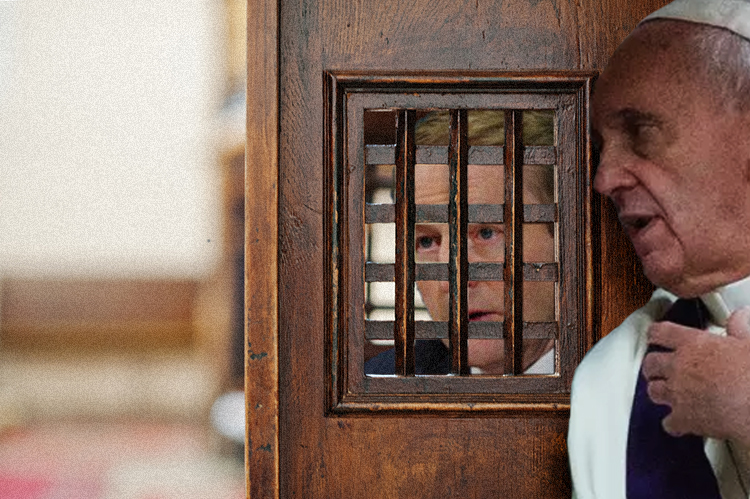 AN exhausted looking Pope Francis has entered the 8th hour of hearing Taoiseach Enda Kenny’s confession as part of the Irish leader’s visit to the Vatican, which was initially meant to last just one hour, WWN can reveal.

Expecting a convivial discussion about delaying the divestment Irish schools from the Catholic Church for as long as possible, the Pontiff instead found his ears at the mercy of Mayo man Kenny’s endless parade of moral failures.

It is alleged that the Taoiseach entered the Papal offices carrying his own confession box, immediately setting it down between himself and the Pope before beginning to intensely divulge all his deepest and darkest sins.

“The Taoiseach is a deeply spiritual man, but feels his local priest is a bit of gossip and so felt that while he was in Rome who better to hear his multitude of sins than the top dog himself,” shared an aide to the Fine Gael leader.

“Top of the Taoiseach’s confessions obviously include the big issues of the day in Ireland, the most heartbreaking ones – how he failed to get Fine Gael a majority government, how he couldn’t put a positive spin on getting his ministers a pay increase and not doing more to help Apple in their EU tax case. Those sort of things haunt a man,” confirmed the aide.

It is thought the Taoiseach is not seeking forgiveness from the Pope for not doing more to pressure the Pope into following through on a pledge he made several years ago when the religious leader said he would meet with Irish abuse victims and do all he could to help them but has subsequently failed to honour.

In order to bring an end to the avalanche of confessions the Pope stated he would visit Ireland in 2018 if the Taoiseach would ‘just shut up’.