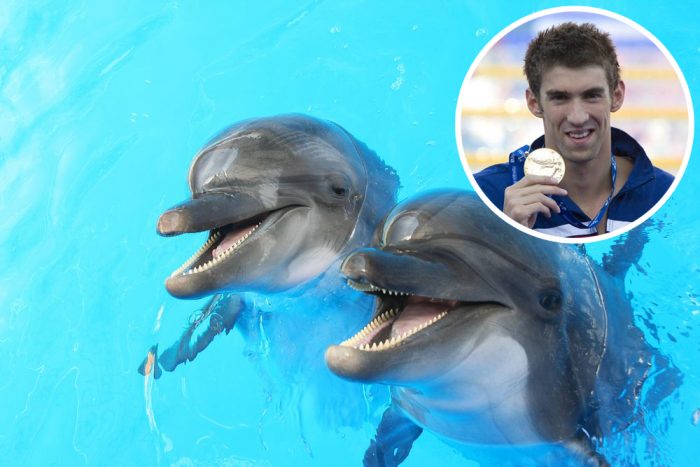 “WE’RE sick of the lies, at some point you have to say ‘enough is enough’ and stand up and be counted”.

Splashing in two paddling pools on the stage of Ellen DeGeneres’s talk show, an emotional Barbara and Martin Phelps admit they have remained silent for too long.

Squeaking to the popular daytime host, the dolphins, residents of just off the Californian coast were quickly moved to tears.

“You probably can’t tell as we’re in water, but we’re in floods of tears, Michael is our only son,” Martin explained.

Michael had washed ashore during a particularly violent storm in 1988 and the parents were unable to retrieve him. Having searched for years they saw him on TV at the Beijing Olympics in 2008.

“I turned to Martin and said ‘that’s our boy’ didn’t I Martin? He had his father’s breaststroke technique, it was uncanny,” Barbara cackled in an annoying high register.

Attempts to reunite with their talented son were blocked off by US swimming officials.

“They explained that he would be stripped of his medals, on account of him being revealed as being 100% dolphin, and we didn’t want to compromise his success, but after winning 22 golds we said fuck it, this is getting ridiculous,” Martin added, speaking of his son’s obvious advantage in the pool over his human rivals.

Michael for his part as always denied being a dolphin, but Olympic officials are now looking into the claims. Concluding the interview, Barbara and Martin admitted they believed reconciliation with their son would not be possible.

“He has a very different life to us now, lucrative contracts and a child of his own. All we do is swim around the ocean all day,” Barbara said, sobbing from her blow-hole.