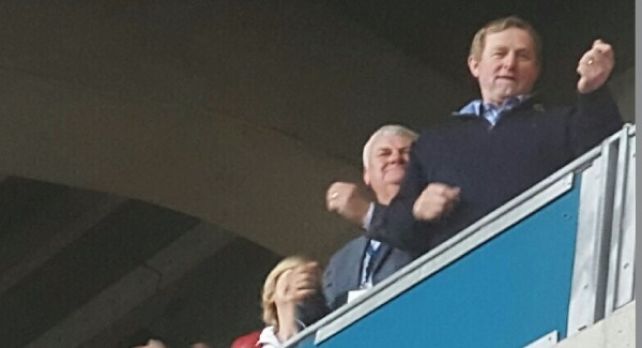 CRINGE ALERT! An unsuspecting primary school teacher from Mayo became the centre of an embarrassing viral video hit this weekend after the 65-year-old was filmed dancing in a cringey manner only a culchie up in Dublin for the night can.

The man was successfully identified as Castlebar native Enda Kenny after a number of his children tagged him in the video on Facebook, pleading with him to somehow have the video removed from the social networking site and cease inviting ridicule on his family.

Kenny was filmed enjoying Bruce Springsteen’s set at Croke Park this weekend, gyrating in a disturbingly uncoordinated manner. While unconfirmed at this point, it is alleged that the elderly man had never attempted to dance before the concert at any point in his life.

Despite being surrounded by equally uncoordinated people in the crowd, the 65-year-old’s dad dancing caught the attention of the internet using public, causing a number of people to feel nauseous while watching the video.

The horror show has since been viewed by an impressive 500,000 people, with many of them coming forward to admit they had been left shaken by the footage.

“Just when you thought he was done giving the thumbs up and swaying, his hips seemed to fly out to the side like they were operating independently of their owner,” shared one viewer of the video Carla Prentice.

“I can’t shake the image from my mind, it’ll be with me until the day I die,” Prentice added.