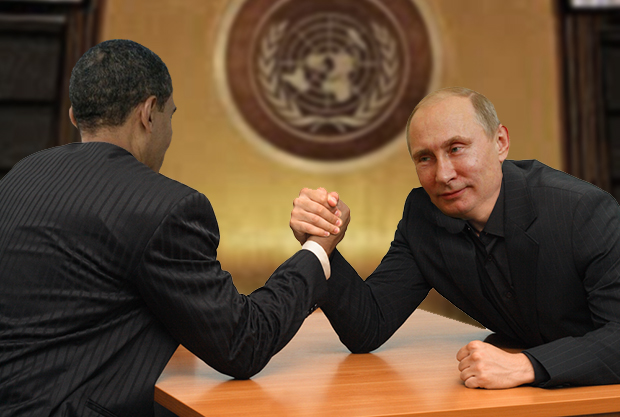 INTERNATIONAL leaders clogged up the doorway entrance to a meeting of the UN General Assembly after rumours swirled throughout the building of a scarcely believable event: an arm wrestling match up between Barack Obama and Vladimir Putin.

Eager to get the best available seats in a UN meeting room, leaders including Angela Merkel and Francois Hollande pushed and prodded their way to a table set aside for the arm wrestling with someone heard to exclaim “this is gonna be so fucking awesome”.

Wagers were made, with the varied military arsenal of the world’s leading nations placed on bets for both men.

The arrival at an arm wrestling contest between the US and Russian leaders came about after 2 years of almost zero contact, however, following remarks made in the UN yesterday by the US president about Russian involvement in Syria, Putin challenged him to a match up.

Despite the traditional arm wrestling rules not requiring a competitor to take their top off and oil themselves up real good, Putin did so in the moments leading up to taking to his seat.

Both nations agreed to a wager which would see the victor of the arm wrestling bout has definitive power over deciding the future of Syria and its people on their behalf.

With either outcome likely to result in continued suffering for Syrian citizens.

Embracing in a fierce and focused hand embrace, both leader’s biceps pulsated with years of cold war hostilities fuelling their efforts.

Some 12 minutes into a contest which seemed locked in a stalemate, both Obama and Putin began to tire, in an effort to win the bout both men beckoned to their suited security personnel with their free hands.

Creating a marvel of a spectacle, secret service men from both nations pushed their leader’s arm in the direction victory, with more men coming from outside in the nearby hallway to add more firepower to both Obama’s and Putin’s arm.

Some 2 hours later the arm wrestle was declared null and void as the two leaders had slowly fallen asleep from exhaustion.

The US and Russian leaders are expected to meet up for a rematch in the near future.