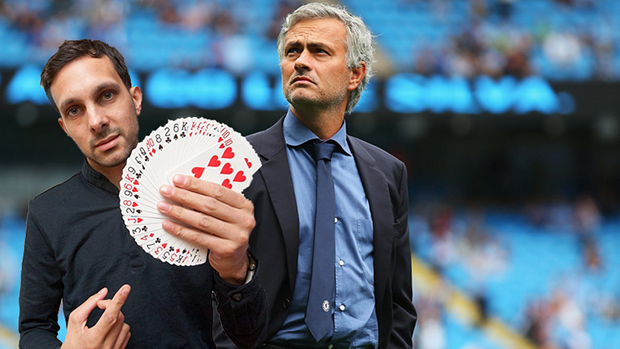 CHELSEA manager Jose Mourinho took the unprecedented step of hiring a professional magician to accompany him on the sideline as his side slumped to a 3-0 hiding against Manchester City.

It is believed the Chelsea boss did this in an effort to distract the media and the footballing public from the fact his team were rubbish.

While many believed Mourinho’s decision to substitute John Terry was the only ploy used to disguise the fact for the second week running his Chelsea side were abysmal, the former Real manager also brought out popular magician Dynamo to the technical area during the second half, fearing a City rout.

A number of Football Manager experts have praised the manager’s shielding of his side from criticism as Sky Sports dedicated over 6 hours to discussing John Terry and not Chelsea’s lifeless performance and the rest media almost universally thought Dynamo’s tricks were ‘absolutely ace’.

The Portuguese native strenuously denied claims that he had hired the amazing magician Dynamo to distract people from things on the pitch.

“This is simply not true, but I think yes, the magician is entertaining, I think you watched him, I think you enjoyed him, he made Cesc Fabregas disappear, you all enjoy, this is football,” Mourinho said as Dynamo continued his juggling act in the post-match press conference much to the delight of the media, “also John Terry is dead,” Mourinho added just to be sure no one would ask about the performance.

Mourinho’s statements were followed up with a flurry of questions regarding how Dynamo knew it was the three of hearts the media was thinking of and how he could have possibly predicted Chelsea’s 3-0 defeat, as the magician had astonishingly revealed a betting slip with the exact score written on it during the press conference.

“I watched the Chelsea game last week against Swansea,” Dynamo replied, giving absolutely nothing away.

Mourinho then calmly concluded his press conference by confirming he is ‘more persecuted than the Jews’ and in a veiled and cryptic appeal to Chelsea owner Roman Abramovich for more transfer funds Mourinho said “Roman, I need more transfer funds immediately”.