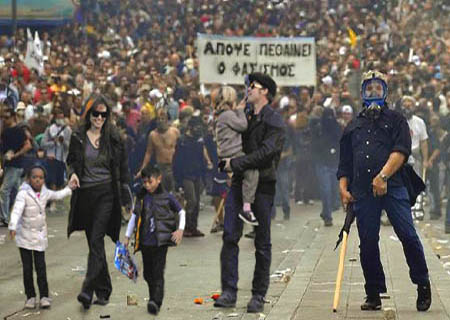 Angelina Jolie and Brad Pitt are reportedly in the “final stages of authorisation” concerning the adoption of the Hellenic Republic of Greece.

Pitt said the cogs are already in motion, but the couple will wait until after their summer holidays before adding another eleven million, three hundred and five thousand, one hundred and eighteen people to the family.

The adoption could be only months away, Jolie suggested. “We have to decide whether it’s financially feasible moving the country to our home in the states or if we have hired a live-in nanny to mind the country at its current location,” she said.

Angelina has spoken in the past of her desire for an even larger family, and according to reports the latest edition will be their last adoption bid for at least five years.

“My Lawyers are in the process of getting an authorisation so I can spend some time with poor Greece. That’s standard operating procedure, basically they need to make sure the neglected European nation will adapt to me, Brad and the kids,” she said.

She added that the other children were excited about the good news: “They were ecstatic when I told them they would be getting 11,305,118 brothers and sisters.

It is believed Angelina is keen for everything to be done officially and has been in close contact with IMF and EU officials.

“The European Union guys have been so supportive. We really couldn’t have asked for a more obliging bunch of people. They really wanted to see Greece go to a good home,” she added.