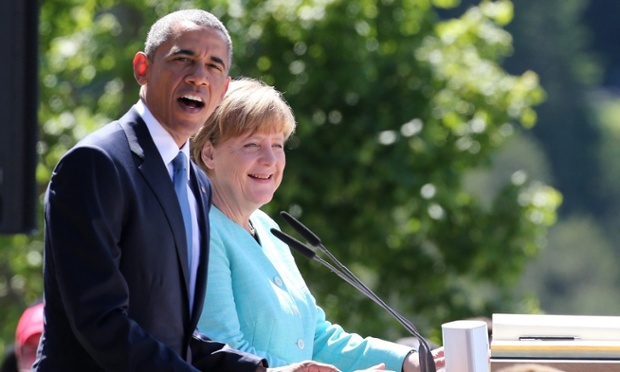 FOLLOWING a record setting patting themselves on the back session, the leaders of the G7 took some time out to discuss Russia with the picturesque surroundings of southern Germany as a backdrop.

Russia, formerly part of what was once called the G8, came under the microscope with the possibility of extending sanctions put in place in the wake of Vladimir Putin’s decision to annex Crimea discussed.

American president Barack Obama, currently presiding over a record level of debt of $18 trillion for his nation, urged Putin to consider the economic wrongheadedness of pursuing an interventionist foreign policy.

“We left Iraq, and paved the way for ISIS to take over and now we have to keep pouring more money in for when we inevitably jump back in, and as fun as drone strikes are – they’re costly too,” Obama said from a podium in southern Germany, appealing to Putin directly by staring into the camera lens.

Seemingly aware of the rank hypocrisy of lecturing a fellow world leader on anything considering America’s chequered past on just about everything, Obama continued.

“I say cut your losses, and get out of Crimea before you end up accumulating obscene amount of debts like we have. You don’t want to spend the next few years distracting people from the facts, it’s exhausting and I should know”.

“Have you ever seen $18 trillion piled up? Well, I haven’t, because we’ve spent it already, but I’d imagine it’s a scarily high pile. Now Vlad, you don’t want that to be you. I look at you, a man with just €250 billion in debt and I admire him. Don’t turn into us, leave Crimea,” Obama concluded backing out of a pre-planned Crimea a river pun at the last minute.