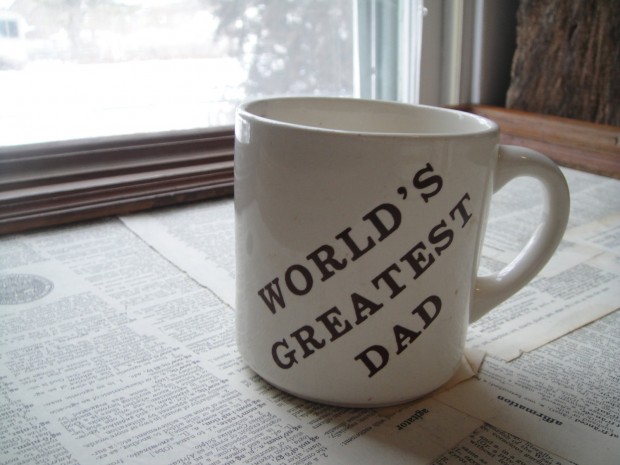 A WATERFORD family are said to be in shock following the revelation that man of the house, father-of-three Jason Carney, was erroneously awarded the one-of-a-kind ‘World’s Greatest Dad’ mug.

“I remember the ceremony like it was yesterday,” Jason told WWN recalling the morning of his birthday on the 11th of May which saw him honoured with the mug in an emotional ceremony.

“Yeah, I had fair idea I was a good dad to the kids, but getting the mug, well it meant everything really,” he added while opening his kitchen cupboard to show the empty space where the mug once resided.

The International Dad Commission (IDC), the awarding body for the mug, award the prize just once a year to only the most deserving and exemplary father on the planet.

In the 24 hours following the ceremony in which Jason’s youngest son Conor (3) handed over the mug which was covered in wrapping paper, questions of Jason’s eligibility have come to light, forcing the IDC to act.

“We had received anonymous eyewitness testimony from an individual who made a number accusations against Jason, including ‘blaming his farts on his children’, ‘forgetting to pick them up for football training’ and worst of all ‘switching on the football despite it being the allotted “cartoon time” for the children’,” Explained IDC spokesman Harold Gad.

WWN has since learned that Jason also gives himself the biggest serving of ice cream at dessert time after family dinners, even on the occasions of his sons’ birthdays.

“He’s a monster and not the man we thought he was, and after further digging we realised there was a case of mistaken identity as another Jason Carney had actually won the prize. He’d saved his children from a burning building”.

The recipient of the World’s Greatest Dad mug tours the world much like Miss Universe, dispensing wisdom to fellow dads while also sharing his favourite puns.

The IDC spend much of their time dedicated to shutting down illegal copycat World’s Greatest Dad mug ceremonies which are believed to number in the millions.