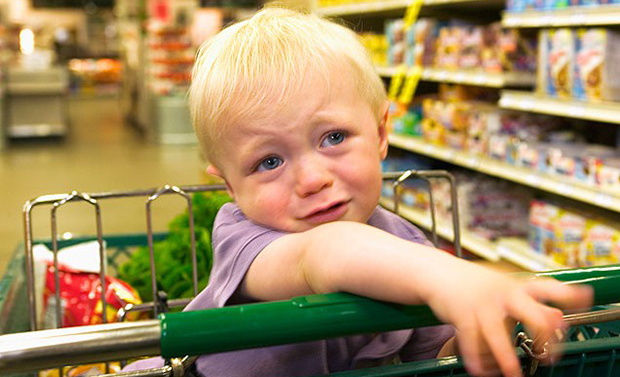 A COUNTY Waterford toddler sitting in the back seat of his mother’s Nissan Micra is expected to wait until reaching Tesco before throwing a tantrum and acting the little bollocks, it has been revealed today.

Jack Power (4), who suddenly just remembered about the €37.99 Transformer in aisle three of the supermarket, pre-warned his mother about the expensive toy in a bid to acquire it through means currently beyond his understanding.

“I weally like tha’ yellow mansformer mammy,” he began, forcing a worried glance from his mother in the rear view mirror.

“Don’t start this now again, Jack.” Karla Power replied, knowing full well what her son is like when he has something on his mind. “You better be good in here now, or there will be no sweeties.”

Already gearing up for the event, the unemployed son of two grabbed his mother’s hand as they headed for the store, carefully holding back his tears until there was more people around to witness them.

Realising her blatant attempt at ignoring him, Jack Power threw himself to the ground like a professional footballer in a bid to punish her.

“Try spank me now bitch,” he thought to himself. “There is no naughty step here. How do you like them apples?”

Whispering into his ear, the embarrassed Mrs. Power tried her best to threaten her son without making it too obvious to judging ears: “Listen here you little bollox, either you get up off the ground now and stop your crying, or we’ll go home now and bin every single one of your toys… including Mr. Bunny.”

Realising the impact of such a move, the hegging toddler stood up in an instant, wondering how his mother could be so cruel to his favourite bedtime toy.

Guilt ridden, the 34-year-old woman hugged her child without thought and brought him to aisle three, where she grabbed the Transformer from the shelve.

“Okay, I’ll get this, but you have to be good for mammy now until your birthday,” she said.

“Sure thing sucker,” he thought, before kissing her on the cheek.