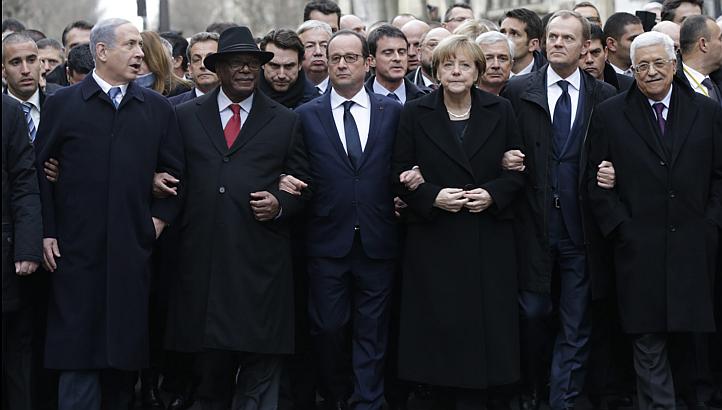 YESTERDAY’S inaugural International Hypocrite Convention held in Paris passed without incident, amid fears that the participants may have been the target of people wondering how they managed to sleep at night.

The convention, which shattered the record for the largest congregation of hypocrites in one place, coincided with a solidarity rally in which an estimated 1.6 million people turned out on the streets of Paris to show support of France following a week of terrorist attacks which left 17 people dead.

60 hypocrites, mostly world leaders, convened at the march to show their disgust at the attack, in which extremists targeted the offices of satirical magazine Charlie Hebdo, in an assault which has been condemned as an attack on free speech.

In a wonderful display of maximising their abilities, the politicians and heads of state managed to not only fulfil their solemn duties, but also find time to add another feather to their hypocrite caps in the process.

“It was a wonderful display of hypocrisy,” said Ives St. Laurent, a french journalist who attended the event.

“You had all these political chiefs of staff standing there, crying out against those who attack free speech, while the whole world watched and commented on the freedom of speech violations perpetrated by those very same men and women”.

“You had Kings and Prime Ministers from a range of Middle Eastern countries, who between them have imprisoned dozens of journalists in the past year alone. There were representatives from the United States, who seem to have forgotten about the detaining of journalists in Ferguson just a few months ago… you even had the Taoiseach of Ireland, who managed to keep a straight face even though he comes from a country with archaic blasphemy laws. It was a stunning display of hypocrisy for all concerned, a true marvel”.

For those who missed yesterday’s International Hypocrite Convention will be glad to hear that the world leaders involved have vowed to continue presenting one face to the public, while acting in a contrary manner for the foreseeable future.