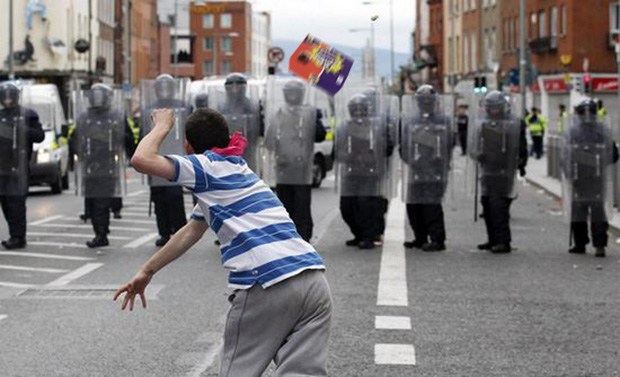 GARDAÍ in Dublin have called for calm this afternoon after three people were reported killed and another 17 injured after violent clashes outside the Cadbury’s chocolate factory in Coolock.

An estimated 16,000 people took to the Malahide road in protest of the company’s new Creme Egg recipe, which they claim is ‘inferior’ to its original predecessor.

Sparking online this morning, the protest spilled out onto the streets after the hashtag #DairyMilkOrDie went viral across twitter Ireland.

Customers reported last night that the taste of the cream egg seemed different, forcing frantic journalists to call up the chocolatier to check if anything had changed – and found out they’ve removed the Dairy Milk chocolate in favour of “standard cocoa mix chocolate”.

“Cadbury’s Creme Eggs are a national treasure,” voiced one concerned man, who then went into detail about how he ‘eats his’. “I normally bite off the top with my incisors first, before scooping out the creamy middle with my tongue. Then, making sure to coat the inside of my mouth with the cream, I lash into the dairy milk chocolate shell. But now, that right has been taken away from me.”

Starting from the city centre, the large crowd of protesters made their way to the factory in Coolock, causing massive traffic disruption, thus forcing Gardaí to engage.

“Everything was fine until we got to the factory. Then it all kicked off when some spokesperson for Kraft addressed the crowd, saying: ‘It’s no longer Dairy Milk. It’s similar, but not exactly Dairy Milk’,” recalled one eyewitness. “Next thing, someone threw a shoe. Then another person threw a box of cream eggs. Then, before you knew it, there were people being thrown at the factory gates.”

Emergency services arrived on the scene shortly after 1pm, just before a Garda special response team was deployed.

Two men and one woman were pronounced dead after becoming impaled on the high fencing around the perimeter of the factory.

“We believe they volunteered themselves to be thrown as missiles,” said one Garda. “I haven’t seen anything like this before, but Cadbury’s would really want to rethink their recipe.”

Since the incident, all roads leading to the site have now been closed off by Gardaí pending forensic examination.