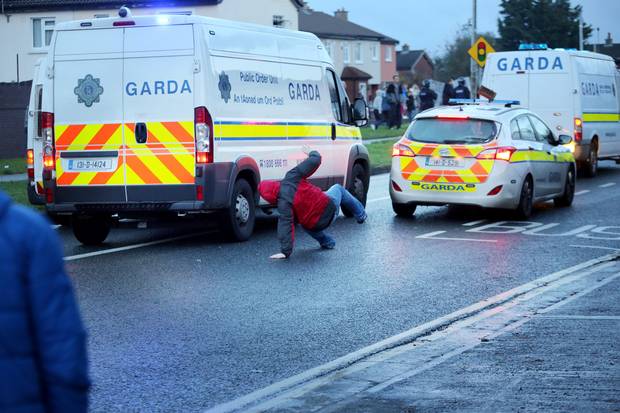 A WATER protester in Jobstown defended his decision to throw a large brick at a Garda vehicle during a ‘peaceful demonstration’ on Saturday, stating that he ‘no like water thing’ and that’s why he did it.

“Me was not happy cause everyone shouting on street,” he said with his mouth, all by himself. “Boo boo lights on car shiny and loud, so me throw rock hard, but fall on bum. Bum sore, but me, okay now.”

Speaking about the incident, the man insisted his protest was peaceful, saying he had ‘hit no person’ during the ordeal, which saw dozens of his fellow protesters barricade middle aged politician Joan Burton into her car while they peacefully rocked her back and forth for three soothing hours.

Meanwhile, other protesters resorted to issuing bomb threats to local TD’s in a bid for peace and understanding from the Irish government.

“Yeah, I figured threatening to blow Alan Kelly to pieces was a great way to raise awareness to the issue of water meters,” explained the man responsible for the threat to the Environment Minister’s constituency office in Nenagh, Co Tipperary. “If anyone else can think of a better way of dealing with them, well, go right ahead. They don’t listen to anything else”.

In response to the weekend unrest, the government announced a ‘protest tax’ to be introduced before Christmas in a bid to clamp down on people with little or no IQ from protesting freely around the country.

“This whole meter thing will pass once we start taxing the culprits responsible for the violence.” said the Taoiseach. “In a few months we will all look back at this whole water thing and laugh”.

When asked by the opposition when the Government will have answers about the water charges, he replied: “What’s the rush? Sure, we still have to deal with the Magdalene laundries compo from two years ago. One thing at a time”.

The Government is expected to announce the cost of water charges this week, some 12 months after debating the legislation that led to the setting up of Irish Water for 4 brief hours.