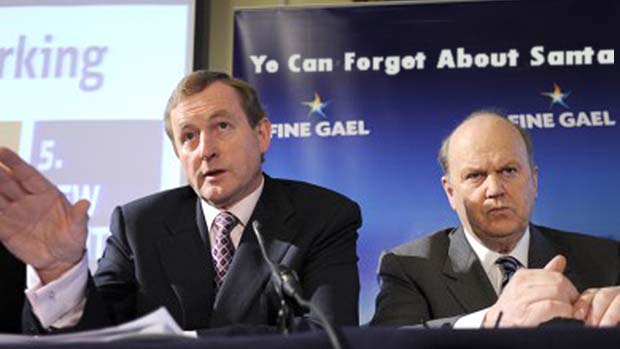 FOLLOWING last weekend’s show of public strength and solidarity in the form of countrywide protests over the introduction of water charges, the government has warned that failure to register with Irish Water may result in Santa Claus not coming this year.

The protests, which were attended by an estimated 150,000 people, came as a shock to the Fine Gael/Labour coalition, who expected a much lower turnout against the onerous charges.

Enda Kenny fired back with a cautionary statement warning the public that failure to comply with the water charges would result in a 4% hike in the Universal Social Charge, and followed up that by stating that the €5 euro hike in child support introduced in Budget 2015 may be in jeopardy if water rates are not introduced.

With the nation failing to bend at either threat, the Taoiseach opened Dáil proceedings by telling the men and women of Ireland that unless they behave themselves and pay their bills, they may not get anything from Santy this year.

“It’s getting very close to Christmas, and Santy is watching everyone very closely to make sure they’re being good, ” said Mr. Kenny, whose grasp on power was revealed to be slipping in a recent opinion poll.

“Right now there’s 150,000 people who marched on Saturday that are on the naughty list, and nearly a million households who have yet to return their completed application packs to Irish Water, so I think there might be a lot of coal in people’s stocking on Christmas morning”.

With further protests planned for December, Kenny then lead his fellow TDs in a rendition of ‘Santa Claus Is Coming To Town’, with dance moves which included wagging a finger disapprovingly during the line ‘be good, for goodness sake’.